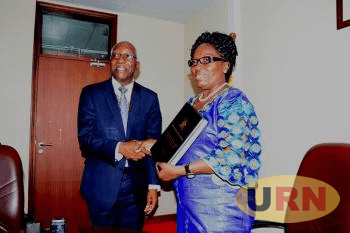 The Auditor General John Muwanga has today released a new report revealing a development of financial indiscipline in government ministries and departments leading to loss of billions of shillings.

The Auditor General found that during the 2016/2017 financial year, a total of 40.781 billion Shillings was lost through the breach of different tax laws by ministries and departments.

Muwanga says that various government entities contravened the different tax laws by failing to pay Value Added Tax (VAT), payment of VAT to non-existent  service providers, and none deduction of Pay As You Earn (PAYE) among others.

Section 35(1) of the Value Added Tax Act requires VAT to be paid by the Ministry or Department as Government counterpart funding. The Income Tax Act, 1997 (as amended) also in sections 119 and 116 require entities to deduct withholding tax and PAYE respectively and Section 123(1) requires the entities to remit the withheld taxes within 15 days following the month in which deduction was made.

However, the newly released audit report presented to Speaker of Parliament Rebecca Kadaga reveals that 37.55 billion Shillings VAT was not paid, 86.6 million VAT paid to non-registered service providers, 261 million Shillings lost in non-deduction of Withholding Tax (WHT), and 1.12 billion WHT none remitted and others.

“The practice not only denies the government revenue for funding the national budget but also attracts penalties and fines which further constrain the cash flows of the affected entities. Failure to settle the taxes may also adversely affect future project financing in the case of donor funded projects,” reads part of the audit report.

The Auditor General advises different government entities to ensure that the respective tax obligations are settled without further delay as required by the tax laws.

“This expenditure is considered wasteful as the expenditure could have been avoided had these been settled in time. I note that the payments are to continue in the near future as a number of the obligations have not been fully settled and there are no concrete plans to clear these obligations,” says Muwanga.

He recommended a central database where accounting officers will be submitting the status of the obligations so that government can plan better in terms of prioritising for settlement and also monitoring the causes of the avoidable expenditures.

In the area of pensions, the Auditor General notes that although pension and gratuity was decentralised in the financial year 2014/2015 with arrears amounting to 199 billion Shillings, to date only 7.4 billion Shillings (3.7%) has been paid to 1,238 pensioners from 26 votes.

“Furthermore, a review of the report on the assessment of the effectiveness of the decentralisation of pension management revealed that only 37 districts were monitored during the financial year 2016/2017. The management of the pension decentralisation is not yet satisfactory. The pensioners are unlikely to receive their pension on time,” said the Auditor General.

Muwanga cited need for government to empower the ministries, departments, agencies and districts to streamline the pension management process through capacity building and regular supervision. He also recommended establishment of a comprehensive pensioners’ database which should regularly be updated.

In the area of mining, the audit report reveals several anomalies with the Directorate of Geological Surveys and Mines issuing Gold export permits for only 16.281 kilogrammes compared to records from Uganda Revenue Authority (URA) indicating that 8,691 kilogrammes of Gold, valued at 339.09 million US Dollars, were exported from Uganda in financial year 2016/2017.

The report also reveals that gold exports permits for an exporter were supported by export permits from the Tourism ministry as opposed to being issued by the Directorate of Geological Surveys and Mines. This contravenes provisions of the Mining Act, 2013.

Muwanga further notes that there was no evidence of payment of royalties on the exported gold.

“This implies that, during the financial year, the country lost revenue ranging from 3.39 million US Dollars to 16.95 million US Dollars in royalties from undeclared gold exports and imports depending on the applicable rates of 1% and 5% for the imported or locally mined gold respectively,” reads part of the audit report.

Auditor General Muwanga also reveals that by the end of the financial year 2016/2017, a private company had not paid royalties amounting to 679.6 million Shillings and that this was caused by the failure by the Directorate of Geological Surveys and Mines to enforce payment.

“Because of the unpaid court awards, interest amounting to 168 billion Shillings has accumulated. In certain cases, the interest had more than doubled the principle amounts,” reads part of the audit report.

Auditor General John Muwanga advises that there should be improved funding with a view of minimizing penalties and related charges and that also the Finance Ministry should categorise and communicate to ministries, departments and agencies their contingent liabilities to enable them disclose in their respective financial statements.