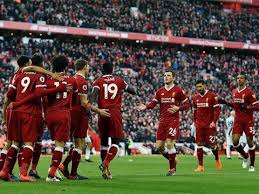 Winning the league title in England is not an easy task, as most of the favorites teams to have won the title, Man U and Arsenal attest to this. They can really tell the pressure that comes along with winning a league title, since they used to go neck to neck before any of these two teams won the league.

With Liverpool not having any premier league title in its shelves, it has on two occasion come close to winning it but slip towards the end and the league winner ends up to be another team.

First there was Steven Gerrard’s slip in the 2-0 defeat to Chelsea, and that was swiftly followed by Luis Suarez’s tears at Crystal palace. This saw Chelsea win the league title where Liverpool was viewed as the favorite since it was on fire under the management of Brandon Rogers.

In this season under the Germany master, Liverpool has topped the table for quite a long period, during Christmas which is the time well known that when a club tops the table during this special time goes ahead to win the title. But it looks like they are seeing the old spirits of throwing away chances of winning the title coming back to haunt them.

Liverpool have again dropped four points out of the six in two consecutive games, Leicester city and westham all ended in draws. This then gave Man city momentum to get back in the title chase as witnessed in yesterdays 2-0 win against the stubborn Everton, seeing the two teams tied at 62 points and only separated by one goal with just 13 games left to play.

Hope is not all gone for Liverpool but much needs to be done for them to win their first premiership title which has only been won by Man U, Arsenal, Chelsea, Man city, Blackburn and Leicester city.