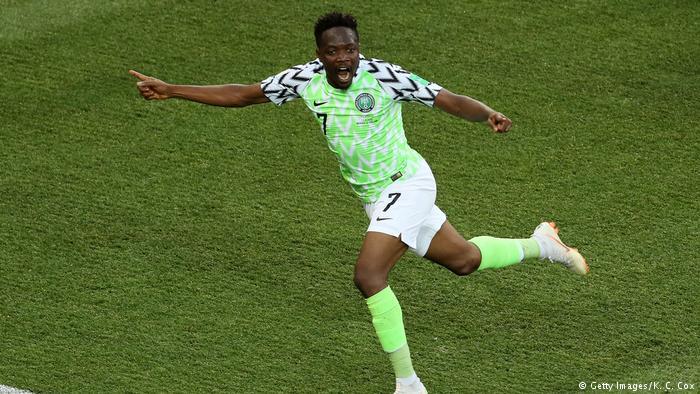 Nigeria 2 – 0 Iceland
(Musa 49′, 75′)
What a night for Ahmed Musa. The Nigerian striker bagged a pair of top-notch second-half goals to bury Iceland. They were his third and fourth World Cup goals (having netted twice four years ago in Brazil), and his fourteenth and fifteenth for his country. He’s now Nigeria’s all-time top scorer, and the country’s most prolific World Cup marksman.
Musa’s first was created by a spectacular first touch. Receiving a cross from Victor Moses, the other notable candidate for man of the match, Musa brought the high ball under control at full stretch, allowing him to half-volley it home with real fury from close in.
Russland WM 2018 l Nigeria vs Island – Tor 1:0 (Getty Images/S. Botterill)
Teenage goalie Francis Uzoho became the second-youngest goalie in World Cup history to keep a clean sheet
The second, meanwhile, was an individual dribble later in the game, as Musa and Nigeria’s confidence was going through the roof. The little number 7 weaved his way round two defenders and goalkeeper Hannes Halldorsson, then kept his nerve to pick his spot and score past the two Iceland defenders desperately trying to cover the unguarded goal line.
Iceland’s best chance to pull one back came from the penalty spot late on, after a VAR decision overruled the ref and gave a spot kick. Uncharacteristically, set piece specialist Gylfi Sigurdsson fired it well over the bar.
View image on Twitter
View image on Twitter

OptaJoe
✔
@OptaJoe
19y 237d – Francis Uzoho is the second youngest goalkeeper to keep a clean sheet in World Cup history, older only than Li Chan-Myong (19y 198d) who famously shut-out Italy in 1966. Trusted.#NGAISL #NGA #WorldCup
10:01 AM – Jun 22, 2018
2,718
2,254 people are talking about this
Twitter Ads info and privacy
The result throws Group D wide open and hands a welcome reprieve to Argentina. Nigeria, who play Argentina in their last game, now have three points. Argentina have just the one after their defeat to Croatia, as do Iceland, who will play the Croatians in their last game. Any of the three hopefuls could in theory join Croatia in the last 16, depending on how the results go.
As it happened…
FULL TIME!
90+6′ Nigeria have used all three subs, so there’s no option to switch. Obi Mikel’s back on the pitch but looks to be in some pain. Only a few more seconds to hold on.
90+5′ John Obi Mikel has hurt his hand and/or wrist in a collision and is receiving treatment.
90+3′ Iceland very nearly unpick the lock late in the day, lacking only the final ball.
90+1′ Six more minutes after a half with several interruptions and the big one leading up to the penalty.
90′ Alex Iwobi comes on for Nigeria, replacing Etebo.
87′ Sub Iceland, captain Gunnarsson lasted longer this time than against Argentina, he makes way for Skulason.
84′ Musa and Iheanacho combine at the other end, with the Manchester City man just missing the target. That’s Iheanacho’s last act of the game. He’s replaced by Odion Igahlo.
83′ Penalty flies over the bar! Gylfi Sigurdsson skies it. That’s not what you expect from Iceland’s finest right foot.
81′ It is a penalty! No question there was contact made on Finnbogason, you could perhaps debate whether it sufficed for a penalty in a messy scene when the ball was rolling out of play whatever happened. But the match officials are satisfied.
80′ Oh, wait… We’re going to VAR after all, so it may be a penalty…
80′ Shouts for a penalty from Iceland after a collision in the box but the ref’s having none of it.
79′ Corner for the Super Eagles, who really look in control now. Cleared at the near post.
75′ GOAL! Musa strikes again. Mazy dribble round the goalie, he becomes Nigeria’s all-time top scorer. A great combination of creativity and composure from the number 7, he really does love the World Cup group stages.
74′ Crossbar! Ahmed Musa tries to double his tally from just outside the box, and misses by inches.

74′ Another attack, another string of Victor Moses touches. Presumably Nigeria also have a left winger?
72′ Big headed chance from a corner for Nigeria’s Leon Balogun, born in Berlin. It’s just a whisker off the mark.
71′ Everything’s running through Victor Moses for Nigeria. He’s been tormenting Iceland down the right.
68′ German second division side Sandhausen’s Rurik Gislason dribbles forward and fires one off from range, it whistles over Uzoho’s crossbar.
64′ Musa, who also found the net in Brazil four years ago, now has 14 goals for Nigeria. That draws him level with Jay-Jay Okocha and Julius Aghahowa. He’s also become the first Nigerian player ever to score three World Cup goals.
63′ Free kick in range for Iceland and Sigurdsson. Tense moment for Nigeria’s teenage keeper Uzoho, but he comfortably deals with it.
62′ Victor Moses is getting busy down the right flank for Nigeria. He created the goal and is often a target in attack.
59′ Huh! Huh! Huh! Time for the second half rendition. Renowned TV series Doctor Who could borrow this as a sound effect. Just pop a “Doctor” in between each “Huh”.
57′ Leicester City’s Wilfred Ndidi nearly makes it two for Nigeria, with a deflected shot from distance. Halddorsson got a glove to it and pushed it over.
55′ Gylfi Sigurdsson digs deep into his box of tricks on the byline, rounding three players and then appealing for handball as his move finally breaks down. Ref waves him away.
49′ A sudden break down the right and Iceland’s tight defensive line evaporated. Victor Moses ran the touchline and crossed. Musa’s exquisite first touch made his finish all the easier, he rifled it emphatically past Halldorsson. Lionel Messi, Jorge Sampaoli and co. breathe a sigh of relief.
49′ GOAL! Ahmed Musa for Nigeria. Lightning counterattack.
46′ We’re off again. No half-time subs on either side.
HT analysis: A rather slow opening period started exhibiting signs of life later on. Nigeria have had more of the ball but Iceland have done rather more with it when in possession. From an Argentine perspective, either a draw or a Nigeria win would be ideal. Argentina face Nigeria in their last game, and that’s a must-win match come what may. But Iceland could put a full three points between themselves and the Albiceleste with a win; and then they will face Croatia in the last game.
HALF TIME.
45+1′ Two more minutes this half. Iceland are pushing the issue a little as the break approaches, another pair of crosses across the box just begging for a decent contact.
45′ Finnbogason nearly latches on to a free kick. He’s already scored Iceland’s first ever World Cup goal and would surely welcome another.
39′ Hannes Halldorsson comes to claim a wayward cross. The Iceland goalie is yet to face a shot and must just be glad to get involved!
37′ Free kick for Nigeria after a shove on Victor Moses. Great spot for a cross, no angle to shoot. Kelechi Iheanacho’s delivery wasn’t great and is headed clear.
34′ Make that four shots for Iceland now. Birkir Bjarnason volleys over the bar.
32′ The stats tell a fun tale after half an hour. Nigeria have had more of the ball and completed almost double Iceland’s number of passes. But it’s Iceland’s possession that’s proving productive; they have three shots while Nigeria are yet to pull the trigger.
21′ Iceland have a corner. Set piece maestro Gylfi Sigurdsson whips it in, but a somewhat panicked-looking Francis Uzoho in Nigeria’s goal comes out and gets a fist to it.
14′ HUH! HUH! HUH! HUH! Iceland’s signature accelerating hand-clap rings around the stadium.
11′ Iceland’s captain Aron Gunnarson has taken a blow to the thigh and looks in some discomfort. He spent much of the season injured and was only just ready in time for the competition, only playing around 55 minutes in their opening game against Argentina.
8′ Alfred Finnbogason with the first shot of the game as both sides try to find their way into this one. Everything’s to play for in Group D, though one of the two qualifiers will be Croatia.
KICK OFF!
These are the lineups in a game that could end up making life extremely difficult for Lionel Messi and Argentina, who are honorary Nigeria fans for the day.