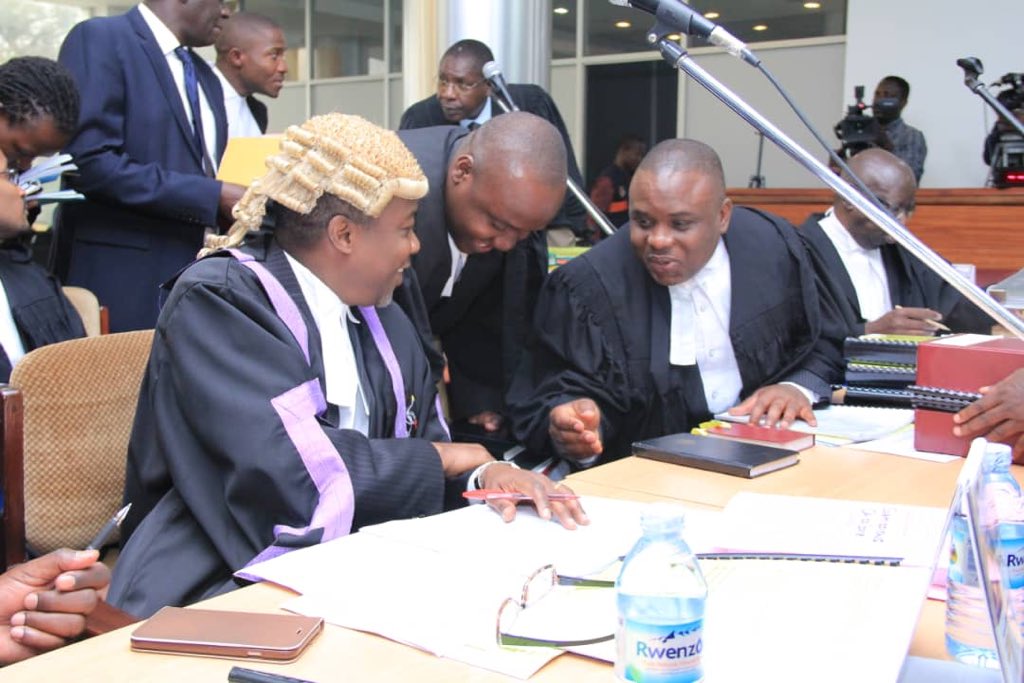 The Government side has concluded defending the Constitutional Court decision that removed the Presidential Age Limit, by asking the 7 Justices of the Supreme court to uphold the same finding of the lower Court.

The Government Team led by Attorney General William Byaruhanga has asked the Chief Justice  to dismiss the Appeal  with costs for lack of merit.

Byaruhanga has even accused one of the Appellants Hassan Male Mabirizi of filing his petition before the Age Limit Bill was  was passed into Law.

According to the Attorney General  Mabirizi had no cause of action  by then  and therefore his appeal cannot stand.

However in his final reply Mabirizi says the acts he complains of both in his Constitutional court Petition and the. Appeal before the Supreme court, started way back at the time of tabling and conceptualizing the entire bill before it was assented to  by the President.

Therefore the Attorney General ought to  have  come up with this application before hearing of the Appeal commenced, and not ambush at the Parties closing remarks.

Meanwhile Uganda Law Society another Appellant, through Senior Lawyer Wandera Ogalo  says the Supreme Court should make a decision barring Parliament from doing acts,  they very well know are wrong from the onset, then later Petition Courts to nullify them.

He cited an example where the Deputy Attorney General Mwesigwa Rukutana warned Parliament  not to proceed on an entrecthed Article regarding the re-instatement of Term -limits, which requires a referendum,  but Parliament never heeded to his advise.

As for the Opposition MPs, their Lawyer Erias Lukwago concluded by inviting their Lordships to nullify the entire bill and save the Country from what they have termed as another catstrophy that offends several provisions of the Constitution.

The Appellants on the whole have urged the Supreme court to clarify its own orders and recommendations made during the 2016  Amama Mbabazi Presidential Petition.

The Chief Justice Bert Katureeba has  announced that judgement shall be delivered on notice to the Parties.

He  warned Mabirizi not to drag him to the East African Court of Justice when he fails to deliver the judgement in the required 60days.

He  says the Appellate Court has 7 Justices and each Judge comes up with his/ her own Judgement which must be read through by other justices.

He said it might take time but they will endeavour to deliver the judgement as soon as possible.

The Chief Justice however thanked Hassan Male Mabirizi that even though he is not an Advocate, he has enriched the submissions at the bar, and promised to also take up his concerns of waiving on the filing fees in the Supreme court.

In the morning session, the Chief Justice Bert Katureebe has tasked  the Attorney General of Governmemt, William Byaruhanga to adress the Court in light of the Appellants’ fear that the removal of the  Presidential Age -Limit  was not meant to benefit the incumbent President.

The Chief Justice also informed   Byaruhanga that after the removal of the  Term -Limits , the only Pillar to that Article was only the Age – Limit.

Katureebe noted that much as Parliament has powers to make laws under the Constitution, it must done within the spirit of Peace, Order, Development and Good Governance of the Nation.

Chief Justice’s intervention came after the Attorney General submitted that A(102b) regarding the Presidential Age-Limit is not one of the Articles that needs  approval of Citizens to be amended by Parliamnet.

However the Attorney General in his reply mantained that Parliamnet is vested with powers to amend the Constitution on behalf of the Public except on entrecthed articles which require referendum,  and Article 102b is not among them.

That the fears of the Appellants is their contention and he has too made his submission very clear.

On the other hand his Deputy Mwesiga Rukutana has also faced it rough when he was asked by the Chief  Justice, what he would have advised the President,  if he (M7) had called him before signing the bill.

Rukutana instead threw the entire  Courtroom into laughter when he submitted that he would have advised  the President to sign it into Law and wait for a Constitutional Petition challenging it.

We Did It, Al-Shabab. And We’re Still Fighting.