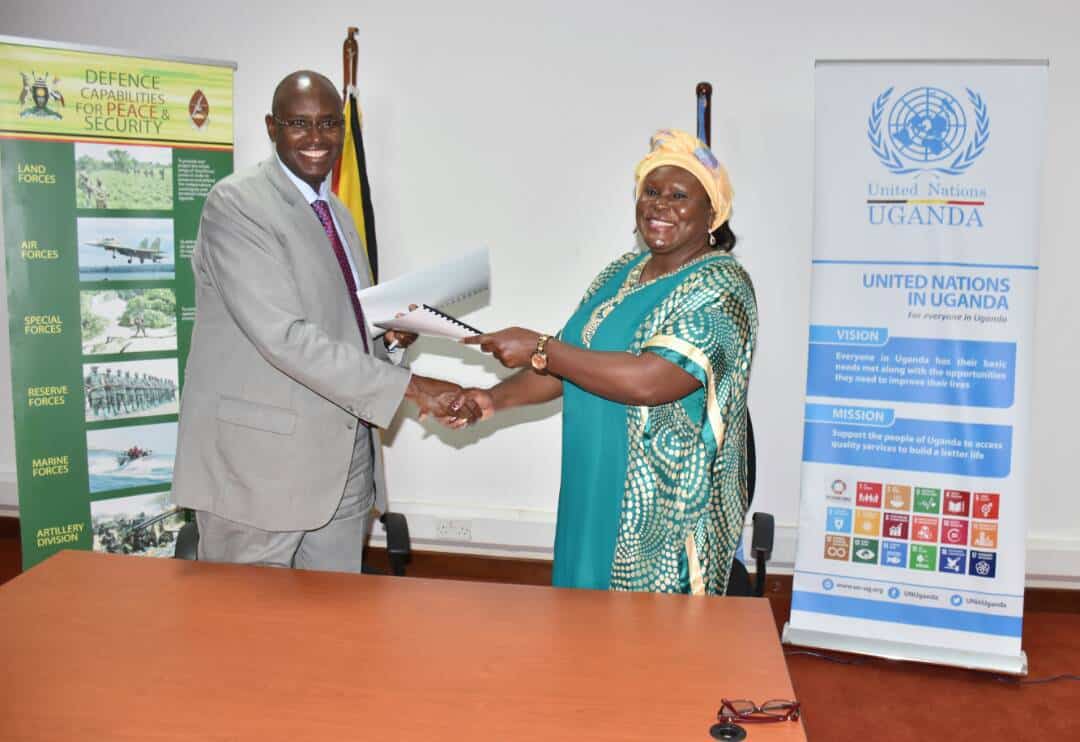 The two signed an MoU confirming the UN Integrated Support Program to the UPDF. The program aligned to Uganda’s vision 2040 notes that peace, security and defence are one of the fundamentals for galvanizing and harnesing Uganda’s economy.

Ms Rose Malango, on behalf of United Nations confirmed the partnership and reiterated their commitment to the proposed program of helping the target group of UPDF veterans,widows and orphans .

The Minister of State for Defence in charge of Veterans, Hon Dr Bright Rwamirama in his remarks said that the increasing number of unemployed veterans was a big threat to the country hence the need to mobilize and intergrate them with gainful skills into their communities.

He called for re-training and re-skilling of veterans as well as going through psycho social training and counselling to help them fit well within their families and communities.

The Minister also called upon the UN to come in and address the needs of its target beneficiaries.

Ms Rose Malanga in a statement assured the minister that the UN had solutions for the needs of their beneficiaries because one of its sustainable development goals was to promote inclusive and sustainable economic growth, full and productive employment and decent work for all. She added that her prayer was to see this program implemented.

Ms Edith Buturo the Ministry’s Under secretary in charge of Finance and Administration, who represented the Permanent Secretary rallied for mobilization and support of the target groups calling it as the main key.

Present at the round table meeting were the UPDF Chief of Defence Forces Gen David Muhoozi, the JCOS Maj Gen Joseph Musanyufu, Officials from financial institutions, Women Affairs in UPDF, UN country teams representatives among others.

Germany lost for the first time in 23 matches as Manchester City forward Gabriel Jesus scored the only goal to give Brazil the win in Berlin.

Germany lost for the first time in 23 matches as Manchester City forward Gabriel Jesus scored the only goal to give Brazil the win in Berlin.