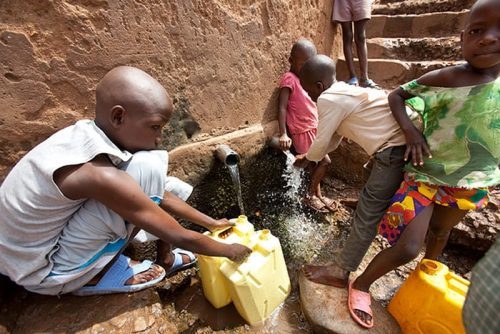 On average it takes rural households over an hour to collect water a fact to limited access to water points in terms of distance and waiting time while at the water source. According to Sauti Za Wananchi a national mobile-phone survey by Twaweza Uganda a non-governmental organization, the average time required by rural household to collect drinking water is 71 minutes, of which 30 minutes are spent waiting at the source. However the times are a little lower in urban areas standing at 49 minutes total collection time of which 23 minutes are spent waiting.

The report indicates that One out of four citizens a representative of 24% of Ugandans have access to piped water mainly found around urban areas.

The findings of the study titled Clean and Safe, Ugandans’ experiences and Opinions on affordable access to clean and safe water show that the figure of Ugandans accessing piped water is much higher in the urban centers standing at 46% as compared to those in the rural areas at 15%.

Releasing the findings based on data collected from 1971 respondents across Uganda in the months of January and February this year, a Sauti Za Wananchi officer Marie Nanyanzi revealed that three out of four Ugandans representing 74% have access to an improved water source that provide cleaner and safer water.

Nanyanzi explains that residents of rural areas are more likely to say the situation is getting worse than those in urban areas.

“We did see that the two main challenges that communities are facing in accessing clean water are to do with insufficient water points then the distance to the water points, this was mentioned both in the rural and urban areas”-Nanyanzi.

Nanyanzi however adds that in the urban areas it is largely the issue of the cost that is why different players should take the findings of this research serious in order to put in place interventions that will improve the supply of water to the households.

According to the report eight out of 10 households -78% harvest rain water but for 69% of the households the water runs out after a week or less the last time they collected it.

Calling for better storage facilities if households are to use the harvested rainwater in the dry seasons Nanyanzi notes that one out of ten households which is 7% was able to store the water for a month or more.

“We all have a role to play, if it is there is need to support citizens to get affordable water tanks of larger capacities so that they are able to store water for a long period and spend less on water costs”-Nanyanzi suggests .

It is against this background that Finance Trust bank is one of the organizations that decided to be deliberate on empowering communities in order to access clean and safe water if they are to stay health and thereafter be saved by the Bank.

The Credit Manager at Finance Trust Bank Fred Kato says the potential customers will not fall sick due to water borne diseases if they have access to clean and safe water and thereby having more productive time which makes them candidates for banking services.

Kato explains that after appreciating the connection between their services the well-being of people, Finance Trust bank decided to come up with specific products for this cause and it has so far invested over 1.5 Billion shillings in products that facilitate water and Sanitation services for their clientele.

He further notes that most communities depend on harvesting rain water so when you give them money they set up tanks, which enable them store more water that can take them for a period of 6 months without fetching water from the wells, these loans we given them to our customers, schools to buy the waters tanks, ….and later pay back in installments.

When I asked the Commissioner in charge of Rural Water Supply at the Ministry of Water and Environment Joseph Eyatu, He acknowledged that whereas water coverage across the country has improve more needs to be done as people demand for quality and convenient water services.

Eyatu stressed that as per the findings eight out of ten people think their service level has improved but their convenience has gone down and we must appreciate that because the population pressures and the climate change, the availability of our water sources is now in question and people now want higher level of water service, they want water nearer their homes.

“So am not surprised that some people would feel that their situation is worse than before because of population pressure and climate change, but also you realized that over time we have moved a lot about 40% to now almost 70% coverage that means there is a lot of work done by government but because of those other external factors, it is not adequate and we surely need to do more work’.’ Said, Eyatu

In order to increase on water points across the country, government is revising its water policy that will ensure better strategies to address the demand.

The commission says that the water policy gives overriding guidelines and principles that will drive the authorities to provide water services to the communities, given the fact that the demand for water irrigation is increasing; the demand for service level of piped water is increasing.

“so definitely the policy has to be revised , our policy is close to twenty years old, it was last done in 1995, we are revising it and we hope by the end of this year it will be ready just to be approved by Cabinet and thereafter it will be a policy for the sector”-said Eyatu.

He says that climate change has also affected the consistence of rain the country used to receive. Today on average in Uganda the longest dry special is ranging from three to four months because we have two rainy season patterns which is a challenge.

Eyatu says that in order to address these issues, the ministry of Water is using solar technology now to power all the high yielding wells in the country.

Currently the ministry has over 200 schemes in the rural areas, leave alone the lager to medium schemes in the urban areas and its target is installing over 2000 solar powered wells in the next five years, revealed Eyatu.