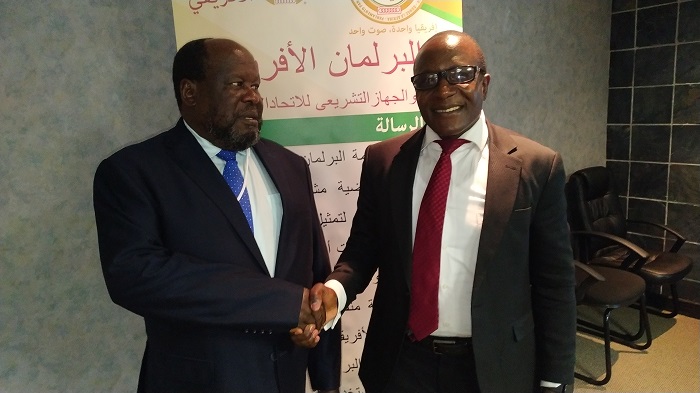 “We are counting on you in helping us make Zimbabwe great again,” said Zimbabwe’s number two top diplomat in a passionate appeal to the Pan African Parliament (PAP) on sanctions against his country.

Citing the continued untold sorrow and deterioration of the well-being of his countrymen, Dr David Musabayana, the Deputy Minister of Foreign Affairs and International Trade, told the continental legislators on Monday, 02 March 2020 that they had incurred losses of about US$42 billion over the 18 years that the sanctions have been at play.

Between 2002 and 2003, the European Union and the United States of America imposed economic sanctions against the Southern African country over what they referred to as government excesses, including the contentious land reform program.

The country faced with a Gross Domestic Product reduction of US$21 billion has also lost US$18 billion in commercial loans and US$12 billion from financing entities, the International Monetary Fund, the World Bank and the African Development Bank. Annually since 2001, Zimbabwe also lost US$4.5 billion in bilateral donor support.

“Take note of our challenges. As Zimbabwe, we call upon you to assist us lobby the West and the rest of the world to lift the economic sanctions so that we too, can participate in the global economy,” Musabayana told MPs on the Committee on Cooperation, International Relations and Conflict Resolution sitting at the PAP headquarters in Midrand, South Africa.

Dr. Musabayana revealed that despite the change in the political, economic, electoral and legislative affairs of his country in the recent past, the sanctions, he referred to as a violation of Article 41 of UN Charter, continue to bite and also handicap the minerals sector from where the country would have been able to secure much -needed funding for the government to meet its obligations to its citizenry.

Article 41 of the UN Charter states that  “The Security Council may decide what measures not involving the use of armed force are to be employed to give effect to its decisions, and it may call upon the Members of the United Nations to apply such measures. These may include complete or partial interruption of economic relations and of rail, sea, air, postal, telegraphic, radio, and other means of communication, and the severance of diplomatic relations.”

“In the mining sector, we cannot sell directly as we have to go through third parties and yet we have a lot of gold and diamond. We are the second-largest producer of platinum in the world after South Africa and for lithium, the fifth,” said Musabayana.

Hon. Abdirahman Salek (Sahrawi Democratic Republic) said Libya and Sudan have also been victims of similar sanctions, which he, also referred to as illegal. “We need to follow up on this matter during the plenary. We need a resolution condemning the suffering in Zimbabwe,” he added.

Libya’s Hon. Salem Gnan said he was full of regret about what is happening to the people of Zimbabwe and questioned the role the African Union (AU) is playing in lifting sanctions imposed against African countries and proposed that as a continent, ‘we could intra trade and overlook dealing with the West’.

Prof. Morris Ogenga Latigo (Uganda) said that there should be mechanisms to appeal to the new Chairperson of the AU, Cyril Rwamaphosa, also President of South Africa over the matter.

“PAP made interventions in the case of Sudan. Why not for Zimbabwe?” he added.

African leaders, Hon. Workya Rouamba (Burkina Faso) said, needed the strength to start speaking with one voice on matters that affect the continent.

“The West always finds ways of putting pressure on African countries,” she said.

For Hon. Bala Ibn Na’allah (Nigeria), the solution to the standoff is blackmail. He said, “we need to blackmail those who impose sanctions because they fundamentally affect the livelihood of the citizens in the respective countries”.

Hon. Abdullahi Ibrahim Ali (Kenya) cautioned that rhetoric would not help salvage the situation and advised that the land in Zimbabwe be shared between the blacks and whites for harmony like it was done in South Africa.

The PAP is scheduled to hold its plenary sittings in May 2020, wherein the request to lift sanctions against Zimbabwe is to be debated by the whole House and a position taken.

Zimbabwe’s former long-serving President, Robert Gabriel Mugabe, who ruled for 38 years until the better part of 2017 was ousted in a bloodless coup. He died in a Singapore hospital on 6 September 2019, aged 95.