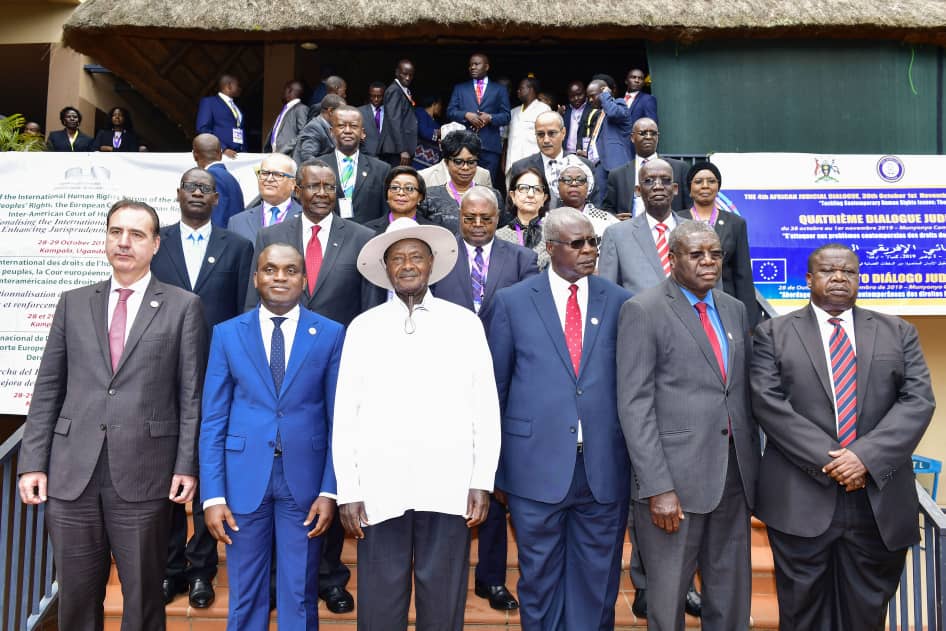 President Yoweri Museveni has opened the 4th African Judicial Dialogue with an advice to State and non-state actors who are devoted to the promotion of justice and human rights to holistically address the causes of injustices and human rights abuses that are deeply rooted in the social, economic and cultural set up of the African society. He said that the issue calls for much more than merely dealing with the legalities.

The President told the conference that opened today at Speke Resort Munyonyo in Kampala that it was impossible to address issues of justice and human rights of the African people in isolation of their economic, social status and cultural set up because they are the leading causes that are closely related to human rights’ violations on the African continent. The 3-day conference has attracted participants from 43 African countries.

Mr. Museveni told the African Judicial Dialogue, which is running under the theme ‘Tackling Contemporary Human Rights Issues: The Role of the Judiciary in Africa’, that human rights abuses cannot just be addressed by mere legislations because most of the causes of human rights abuses are not of legal nature.

“There are fundamental human rights such as the right of access to food, shelter, clean water, clothing, education and health. These cannot be addressed legally but rather by developing the economy to enable the state to support her citizens,” he said.

“Man has not only been abused by fellow man. He has also been abused by nature such as floods, drought, diseases, famine and earthquakes, among others. These can only be addressed by development solutions and not by legislations,” he added.

He, therefore, stressed that those devoted to safeguarding human rights, need to remind themselves of the strategies that can help the economies of Africa become vibrant so that the African population can transform from peasant to middle class society to be able to overcome most of the human rights abuses. He emphasized the need for the economic and political integration of the African continent, as one such intervention, that all Africans in the leadership positions and in the academia need to work so much to promote in order for Africa and her people to prosper.

The President, however, said that there were other political and social rights that could be safeguarded by legislations but added that most African countries are faced with a danger of imposing on their people and their laws, liberal concepts of the developed world that cause a clash of African and European cultures; that has made safeguarding of human rights in Africa hard.

“The legal system in Africa is merely transplanted from the West and needs to be harmonised. Some people are, for example, against the death penalty but for me, I am for the laws of Moses of an eye for an eye, a tooth for a tooth. Laws should be aligned to society otherwise some laws may end up being an injustice to the population,” he noted.

“Some of our cultures have been outlawed but people have ignored the laws and continued to practice their cultures because they see no harm in them. So, the existences and practices continue; which shows that those who designed the laws never did enough consultation to put people’s cultures and norms into consideration because not all African practices are bad,” he noted.

The President of the African Court on Human and People’s Rights, Justice Sylvain Ore, commended President Museveni and the Government of Uganda for being champions in safeguarding human rights on the African continent as manifested by Uganda’s ratification of all the protocols aimed at safeguarding human rights including the one that established the African Court on Human and People’s rights. He observed that Uganda’s hosting of the largest number of refugees in Africa is another indicator of the country’s commitment to promoting human rights. He further commended Uganda for contributing to justice in Africa by being a leading contributor of Judicial Officers to the leading Continental judicial organs.

Chief Justice, Bart Katureebe, commended the African Human and People’s Rights Court for choosing Uganda to host the 4th judicial dialogue, the first ever to be hosted outside the Court’s headquarters in Arusha Tanzania. He said Uganda’s judiciary is looking forward to benefiting from the dialogue especially in handling cases related to human rights violation. He thanked President Museveni for finding time out of his busy schedule to open the conference noting that it showed his commitment to the promotion of human rights in Uganda and the African continent.