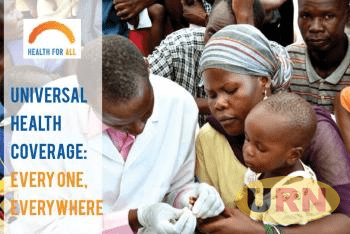 A statement by WHO country office in Kampala says that was the consensus from participants at a high-level meeting hosted by the World Health Organisation Country Office in in Kampala as part of the commemoration of World Health Day 2018 which also marks the 70th birthday of the organisation.

The participants said Uganda has what they termed a robust health sector development plan that seeks to, among others goals “accelerate movement towards Universal Health Coverage with Essential health and related services needed for promotion of a healthy and productive life” as  encapsulated in the overall targets the country’s Vision 2040.

They said Uganda also has a health sector monitoring and supervision framework, and an elaborate and well spread health infrastructure at all levels of national and local government administration.

Dr. Prosper Tumusiime, the head of World Health Organisation Regional Office for Africa the Vision 2040 together with the existing health infrastructure are strong foundations for Universal Health Coverage.

This year, World Health Day was dedicated to furthering the provision of universal health coverage (UHC).

Sustainable Development Goal (SDG) 3.8 breaks this down into two elements: providing essential health services such as treatment for disease and health checks, and ensuring that when illness strikes, it doesn’t destroy family finances.

Dr.  Tumusiime however observed that despite the strong foundation, the country still has a long way to go to achieve Universal Health Coverage.

Tumusiime pointed out in reference to critical health indicators including the health workforce density now estimated at 1:55 patients.

Statistics also indicate that presently, about 72% of the Ugandan population live within 5 km of a health facility and that only 13.4% of health facilities carry out scheduled maintenance of medical equipment.

Other indicators according to a WHO statement show that only 37.5 of hospitals offer intensive care services while health facility deliveries stand at 58.1%; the mandatory four antenatal visits are at 37%.

Dr. Tumusiime said though there is significant progress in the sector, it is still below the target to meet Vision 2040. The problem according to Tumusiime is sustaining progress and ensuring equity. She says health financing is still inadequate and that effective access to health remains a challenge.

Dr Aceng said the Community Health Extension Workers strategy yet to be implemented but that has been well planned to contribute significantly to the Universal Health Coverage.

Meanwhile WHO Country Representative in Uganda, Dr. Yonas Tegegn said investment in health is the most profitable investment for any country noting that everybody has a role to play.
Economic Policy Research Centre (EPRC) in June 2017 study about said Uganda still faced challenges to meeting the Universal Health Coverage targets.

Among the fundamental challenges according to the study included the health infrastructure needed to deliver Universal health Coverage (UHC) in Uganda.

No, Facebook doesn't secretly listen via your microphone to target ads at you