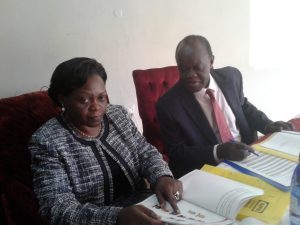 The junior health minister, Sara Opendi confirms to the nation that Uganda has no Crimean hemorrhagic fever as earlier reported by politicians in Nakaseke district.

Political Leaders from the district led by their area MP Hon. Lutamaguzi and the district chairperson declared that congo fever had attacked the residents leading to the death of two people reports the health ministry distanced.

Its upon this matter that the minister cautioned politicians against making unconfirmed statements on health matters saying that they end up alarming the nation.

The minister says that they are still investigating on the fever that attacked Nakaseke residents though preliminary reports indicate that the disease is caused by ticks and a team from the agriculture and health ministries in the coming three months are to start spraying pesticides to kill the ticks in the area.

There was heated debate yesterday in parliament as a section of members accused govt and mainly the health ministry for remaining silent as people continue to die of the deadly disease.

Following deaths after people attending health camp services offered by various health facilities with the recent being the trouble sum Mengo hospital health camp, the health ministry and the Uganda medical and dental practitioners association are soon coming up with guidelines to be followed before a medical camp is hosted in the country.

Though government agrees that health services are not fully reaching the communities, with services offered by health camps are helping facilitate and compliment govt services though govt insists that they should be of high quality aimed at saving lives and not losing them.

State minister for health, Sara Opendi confirms that the guidelines are to help crack down on irregularities of the health camps.

However, the chairman Uganda medical and dental practitioners association, Dr. Joel Okulo confirms that most health camp sponsors have been by passing the regulations but with the coming of new rules this will have to stop.

Dr. Okullo notes that they are soon finalizing with findings made against the mengo health camp and will be presented to the health minister.

The public complained about the health camp held by Mengo hospital last after care takers of the patients had started witnessing deaths of their beloved one. Reports indicate that over 10 patients who attended this camp lost their lives after. Reports the hospital administration distanced.