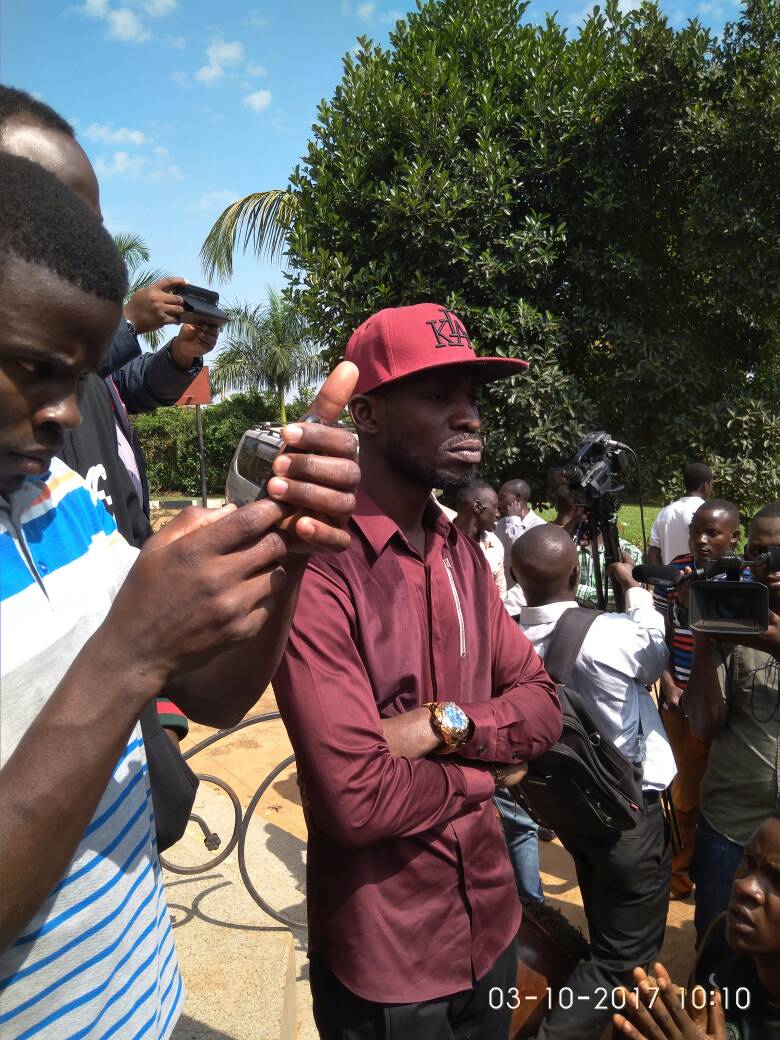 Today the country has woke up to sad and terrifying new of twin gurenage going on in homes of the two expelled legislators, Hon. Robert Kyagulanyi in Magere just 15 KM away from Kampala and Sewanyana in Makindye just 7KM away from Kampala city center which the MPs condemned and pin the side that is moving to remove presidential age limit to be behind this groosam acts.

Speaking to Kyagulanyi AKA Bobi Wine at his residence, he said the grenade went off at round 1am in the re-hours of the morning just next to the window of his son’s bedroom and termed this act as a sign of cowardice from the tormentors geared at making the opposing legislators back off the mission to oppose the lifting of presidential age limit something he says he will not drop and vows to continue fighting for the protection of the constitution since it’s his mandate.

Just like Kyagulanyi, Hon. Allan Ssewanya also narrates almost the same story but confirms the blast going off at around 2am in the morning but did not cause any injuries to anyone at his residence and attributes the blasts to those wanting to silence them to pass the lifting of the age limit bill.

The legislators also called the police to carry out investigations on the matters but came very late and the two legislators are now vowing to come up with their own security measures to provide better protection to themselves and their family members but Kampala metropolitan police spokesperson Emilian Kayima says investigations are on going to crack down those who were behind the illegal acts.

The opposing voices had planned to kick off a campaign to use public means as they go to work as a sign of dissatisfaction to the current regime over the lifting of the presidential age limit but police among other security organs very early in the morning had deployed heavily at their respective residents.

At former Forum for Democratic Change president, Dr. Kizza Besigye police was armed to the tooth to prevent him from moving out of his home who also played cool and addressed a press conference where he condemned the elite for maintaining the current regime in power as they have on many occasion failed to take part in the campaigns geared towards driving the NRM and president museveni out of power after failing the nation.

Besigye now says he will leave the citizens to fast make a move before he joins in with his moves but assures the nation that soon the current regime will be shaken down.

However, Kampala city lord mayor, Elias Lukwago who tried to move out of his home was arrested by police and taken to an unknown detention center.

FDC mobilize Ingrid Turinawe who had moved out of her home in Gayaza on boda Boda and had boarded a taxi was forcefully arrested and taken to an unknown destination for detention.

And news coming out today shows that Hon. Robert Kyagulanyi Sentamu and Hon. Gerald Karuhanga have been arrested and taken to an unknown destination by police as they were moving to Hon. Allan Ssewanyana’s residence to pay him a visits.

The group of over 25 MPs who decided not to attend parliament for the three sitting not until the expulsion for their fellow legislator is done are ready to continue with the fight as they protect the constitution.

Today the owner of the bill. Hon. Raphael Magyezi has tabled the bill and before parliament following getting the certificate of financial implication and the next step is to start public consultations on the embattled bill.

Every entrance to Kampala central business districts were beefed up as police and other security organs had deployed to prevent any demonstrations that would occur.

NEW STRATEGIES TO CRACK DOWN DISEASE THROUGH COMMUNICATION