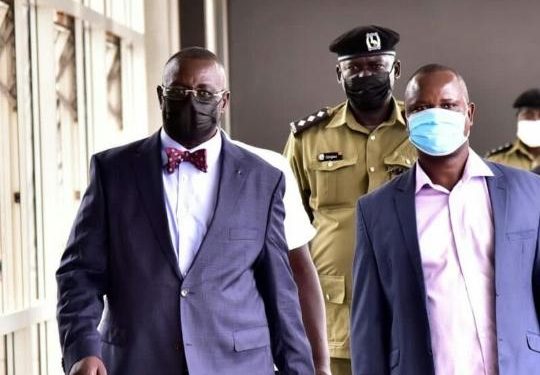 The Speaker of Parliament Rt Hon Jacob Oulangh on Thursday returned to Parliament ending months of speculation about his health and whereabouts.

Oulanyah held a closed meeting with the leadership of Parliament led by the Deputy Speaker of Parliament Anita Among, the leader of Government Business Robinah Nabanja, Leader of Opposition Mathias Mpuuga and the Commissioners of Parliament.

He later proceeded to attend a closed meeting with the leadership of parliament.

“Yes the speaker is around as you can see and he has come to visit the presiding speaker, who ealir told you how they have a work arrangement; so, as you can see ,as i had told you that he will be right back” Parliament Director of Communications and Public Affairs Mr. Obore who attended the meeting said.

According to Director Communications and Public affairs of Parliament Mr Chris Obore they dicusesed how to run Parliament better ,to serve Ugandans .

He thanked the leadership of Parliament led by the Deputy Speaker of parliament Anita Among for the good job and for ably steering the house while he was away, which demonstrates that it’s about Parliament and not Oulanyah.

Mr Obore added that the speaker has emphasized working for the people of Uganda, saying that God has called them at such a time to be of service to the people.

Mr Obore reported that the Speaker called on the leadership of Parliament to put titles aside and be of service to the nation which has been his call since his election as speaker of the 11th Parliament.

“He is back to office from what had occupied him” Mr. Obore said. There was also a prayer organized by the Parliamentary Anglican chaplin to welcome Oulanyah back.

MPs -Urged to Take Up Lessons in Etiquette and Public- Speaking