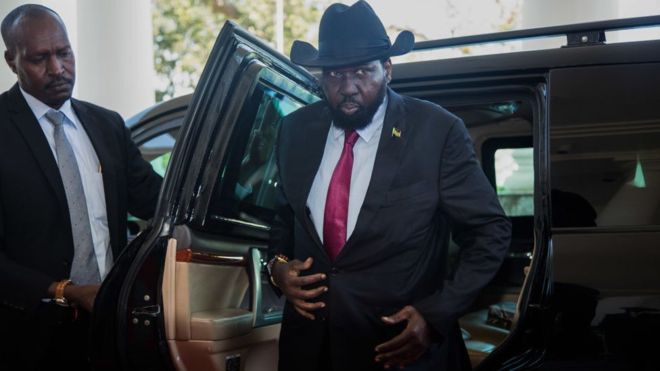 A presidential spokesman defended the $16m expenditure, saying MPs could not be expected to “use motorbikes”.

Critics have accused the government of rewarding MPs two weeks after they voted to extend President Salva Kiir’s term to 2021.

The government says elections cannot be held because of the ongoing civil war.

More than half South Sudan’s population is threatened with starvation – the food crisis is blamed largely on the conflict which broke out in 2013 between forces loyal to Mr Kiir and his sacked deputy, Riek Machar.

It has forced 3.8 million people to flee their homes, according to the World Food Programme (WFP).

Africa Live: More updates on this and other stories
Salva Kiir: The president in a cowboy hat

Residents of South Sudan’s capital, Juba, condemned the government for spending the money on cars rather than on development projects.

“Forty-thousand dollars per head is a lot of money. For what kind of transport is that?” one woman told the’s BBC Newsday programme.

“The government is not caring about the situation of people. Is this corruption? Are MPs being given the money to silence them?” she added.
South Sudan’s crisis
Image copyright Getty Images
Image caption More than seven million depend on food aid in South Sudan

South Sudan is the world’s newest state
President Kiir has been in power since it gained independence from Sudan in 2011
The conflict, that erupted in 2013, has caused one of the worst humanitarian crises in Africa
It has left 7.1 million people out of a population of 12.2 million “at risk of severe food insecurity”, according to WFP
About two million people have been forced to take shelter in camps inside South Sudan
Another 1.8 million are refugees in neighbouring states
The elections were initially due in 2015.

‘Soldiers will kill you for no reason’

‘I spent days hiding in a swamp’

Another resident said some civil servants had not been paid for four months, and the government should have spent the money on their salaries.

Presidential spokesman Ateny Wek Ateny told BBC Newsday that the it had been budgeted for and it was “nonsensical” to suggest that South Sudan’s ruling elite was wasting money.

The MPs would repay the loans over five years, just as they had repaid similar loans given to them in 2005 and 2009 to buy cars, Mr Ateny said.

“Mobility is part of the rights of the parliamentarian,” he added.