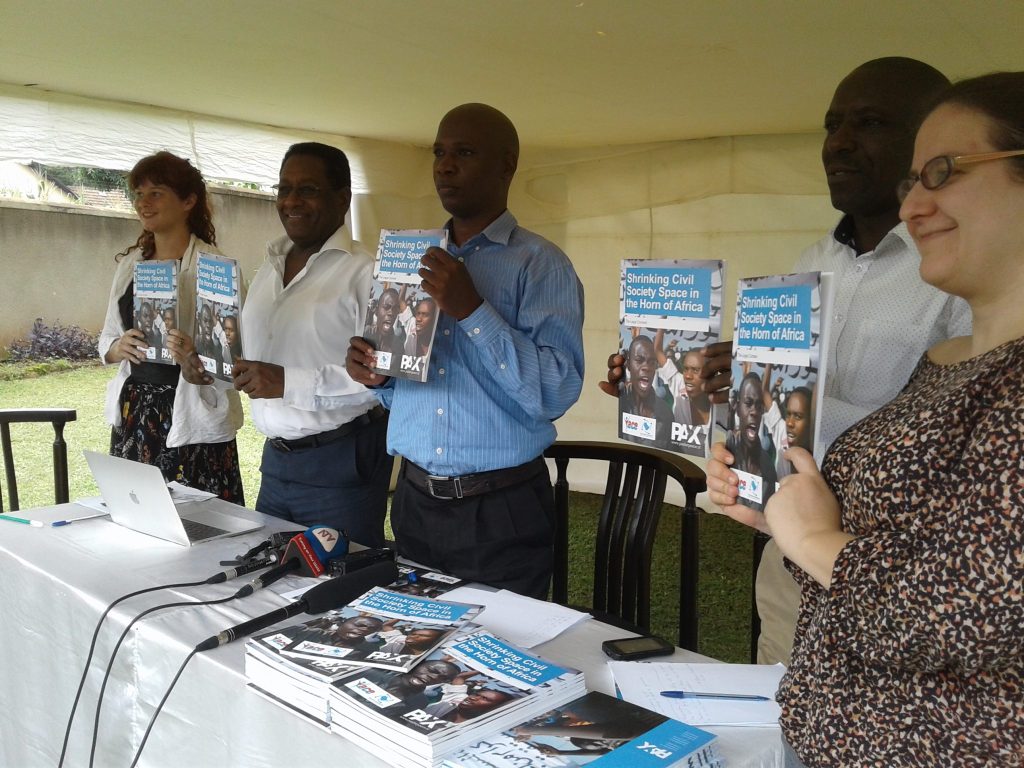 A report released today by rights NGOs highlights the continued shrinking civil society space in the horn of Africa which hinder effective service delivery of the organization to the targeted  masses the countries of operation.

Survey that was carried out in eight countries including Uganda, Eritrea, Somalia, Sudan, Ethiopia, Rwanda, Kenya, and S.Sudan indicates that govts in these respective nations are copying from each other the policies and regulatory frame works used to restrict civil society operations despite them being signatories to international human rights protocols that clear necessitates them to promote and protect the rights to free expression, speech, association among other fundamental rights.

According to Muhammed Ndifuuna the executive director HURINET-Uganda, states that though of late Uganda was known as having a relatively open space for operation of CSOs, passed restrictive laws in 2015 which legislative change appears motivated by the desire to better control civil society.

However, its only through application of the law over time that the full extent of its impact has been understood sighting examples of over 20 NGO break-ins in and around Kampala with no clear investigative report issues by police and other security agencies.

Meanwhile, the chair Horn of Africa CSO foundation, Albaqir A Mukhtar adds that a vital requirement of a viable democracy is the active participation of the citizenry in social and political movements which can easily be visible in the relationship between the govts and CSOs.

Mukhtar says, many countries on the African continent have developed enemity between the CSOs in fear to promote democracy and human rights as they tend to infringe themselves on power for long hence denying their citizenry services.

Due to the demanding legacies of western policies such as colonialism and structural adjustment programmes, among others, African societies have considerable reason to treat foreign intervention with suspicion. Restrictive governments, however, are exploiting these concerns to undermine locally led and founded CSOs who seek international support. In some countries, these attacks have been legal, requiring government permission to receive foreign funding (as in Sudan) or restricting CSOs to a certain percentage of foreign funding (as in Ethiopia). In other contexts, attacks have been rhetorical with governments mobilizing citizen concerns about international meddling to discredit CSOs raising legitimate concerns about government performance.

The report further recommends that African and regional govt review their laws and policies relating to the operation of CSOs to ensure that these respect legal protections in respect of freedom of association under international law, AU policy instruments and their own national constitutions, relux nation registration laws to do away with discrimination and involve only notification, allow NGO have self regulation, enable NGOs engage in revenue generation among others.

We Have Enough ARVs Government

We Have Enough ARVs Government