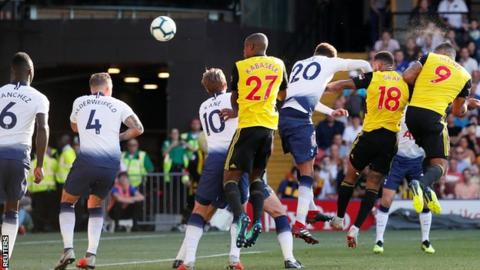 Both sides began the match with 100% records but captain Deeney led the home side’s comeback with his second goal of the campaign before Craig Cathcart’s second-half header decided a tight encounter.

Tottenham had scored a fortuitous opener as Watford midfielder Abdoulaye Doucoure bundled into his own net but, after winning their first four league games for the first time in 30 years, it is the Hornets who join Liverpool and Chelsea on maximum points at the top of the table.

Gracia said of Deeney: “He has a special personality. I’ve already seen and said many times he is very important on and off the pitch, today he showed that again but it is no surprise for me.

“It had been an amazing start. We are in a good moment and trying to enjoy it, knowing we have won four games – but it is only four games.”

Relive Sunday’s action as it happened
Tottenham’s Son Heung-min avoids military service
In a first half of limited chances, England midfielder Dele Alli had the earliest opportunity for either side with a looping header that only momentarily concerned the back-pedalling Ben Foster, before Deeney headed over for the Hornets from Daryl Janmaat’s inviting cross during a particularly quiet opening 20 minutes.

Harry Kane, in particular, cut a frustrated figure for Spurs and it took until first-half stoppage time for either side to manage a shot on target – Deeney’s weak long-range effort collected by Michel Vorm, stand-in for injured Spurs captain Hugo Lloris.

But the visitors found themselves ahead soon after the break, as Doucoure turned into his own net after Watford had failed to clear.

Deeney led the charge as the Hornets looked to respond and saw his cross diverted on to the crossbar by Spurs defender Toby Alderweireld moments before levelling from the resulting corner.

And it was another set-piece that allowed the Hornets to turn the game around on 76 minutes as defender Cathcart nestled a powerful header into the top corner of Vorm’s goal to ensure Watford’s best ever start to a Premier League season continues.

Gracia happy with Watford’s ‘amazing start’
Watford had already managed their best ever Premier League start by defeating Crystal Palace, Burnley and Brighton with relative ease, but they proved their position in the early league table was no fluke as they matched Tottenham stride for stride.

The Hornets, with six wins and just one defeat under manager Javi Gracia, boasted a home record second only to Liverpool heading into the weekend and demonstrated exactly why sides have found it so tough at Vicarage Road against a Spurs side buoyed by Monday’s 3-0 win at Manchester United.

They kept the visitors at arm’s length with few scares during a tight first half and were, on the balance of play, unfortunate to find themselves behind as Frenchman Doucoure deflected the ball beyond team-mate Foster.

Jose Holebas and Roberto Pereyra continued to display excellent understanding down the left flank, although it was skipper Deeney in particular who once again proved the inspiration to his side.

It was Deeney’s unrelenting work-rate and willingness to chase the ball down that led to his equalising goal, which gave the Hornets the belief they needed as the momentum swung their way.

It is early days but the table does not mislead. This continues to be a brilliant start from Gracia’s side.

“Four wins out of four is a huge achievement for a club of our size,” said Deeney.

“We’re not naive to think we’re going to go on and win the league, we’ve got a lot to work on but we have an added boost and confidence from this result,” he added.

However, the visitors were unable to find their rhythm against Watford and failed to record a single shot on target in the opening 45 minutes – the first time that has happened to them in the Premier League since December 2017 against Manchester City.

And Pochettino’s side, who will begin a tough Champions League group stage against Barcelona, PSV Eindhoven and Inter Milan following the first international break of the season, simply could not find a way to break down the home side’s resolute defence as Christian Eriksen in particular was restricted to long-range attempts.

Tottenham made no signings during the summer transfer window, but Lucas Moura’s encouraging start to the new campaign – including two goals on Monday night – may make Pochettino feel like he did, because the Brazilian, enjoying his first consistent run in the team with Son Heung-min away on international duty, was again by far Spurs’ liveliest player.

He could not, however, prevent the end of their 100% record, and Pochettino’s side, who began the day knowing a big enough win could take them top of the table, must make do with fifth place for now, a point behind champions Manchester City.

“We need to show more respect to this competition. It’s difficult for me to understand after four years of us being contenders,” said Pochettino.

“Today, from the beginning, we needed to go there like a lion. If you want to win you need to show that character,” he added.

“Maybe you cannot play so well but you need to win this type of game if you want to be a contender at the end.”

Man of the match – Troy Deeney (Watford)
Troy Deeney celebrates with Craig Cathcart
The Watford captain led by example, harrying the Tottenham back line throughout and ultimately providing the inspiration for his team’s impressive fight-back.
Watford finally beat Tottenham – the stats
This was Watford’s first league win over Tottenham since May 1987, ending a run of 12 league games without a victory over Spurs.
Watford have won each of their opening four league games of a season for just the second time since 1988-89 and this is the first time they have done so in the Premier League.
Since Gracia took over as Watford manager in January, no side has won more home Premier League games than the Hornets’ seven – which is level with Arsenal, Liverpool, Man City, Man Utd and Tottenham.
Watford’s run of four consecutive Premier League wins at Vicarage Road is their best home run in the top-flight since December 1986 (also four straight wins).
Deeney became the fourth player to score in 100 matches for Watford in all competitions, after Tommy Barnett, Ross Jenkins and Luther Blissett.
Holebas has been directly involved in five Premier League goals so far this season – more than any other player in the competition.
This was the first time that Tottenham have lost a game they had been leading in the Premier League since November 2016, ending a run of 48 league matches without defeat when taking the lead at any stage.
What’s next?
After the international break, Tottenham return to Premier League action against Liverpool on Saturday, 15 September (12:30 BST) while Watford host Manchester United later that day (17:30 BST).