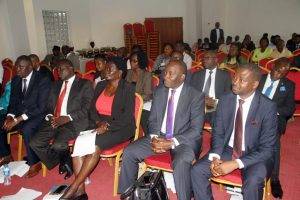 ABUJA:
The Opposition in Parliament has been advised to avoid being sensational and confrontational; but to instead strive to be objective and balanced in their approach to Parliament business and politics.
The Leader of the House of Representatives in Nigeria, Hon. Femi Gbajabiamila, in his address to visiting Ugandan Opposition MPs in Nigeria said that Opposition parties should also be in position to commend government and majority parties when they are on the right path, but still chastise them when on the wrong path. Gbajabiamila, was initially a Leader of the Opposition in the Nigerian legislature.
“You must strive to be credible both in committees and in the plenary. The exercise of your role as Shadow Government should be done in a responsible manner, devoid of the need to be sensational or confrontational,” said Gbajabiamila, who was making a presentation on ‘Improving the effectiveness and efficiency of accountability committees.’ The presentation was at the start of a five-day workshop on Effective Opposition in Parliament for Uganda Opposition MPs, held at the Nigeria National Assembly in Abuja, on Monday, 18th Sept. 2017.

The Leader of the Opposition, Hon. Winfred Kiiza, led the delegation of MPs for the benchmarking workshop organized by the National Institute for Legislative Studies.
The delegation includes: the Shadow Minister for Internal Affairs, Hon. Muhammad Muwanga Kivumbi; the Chairperson, Public Accounts Committee, Hon. Angeline Osegge; Hon. Silas Aogon (Ind., Kumi Munic); Hon. Mathias Mpuuga (Masaka Munic.); Hon. Fred Tumuheirwe (Rujumbura) and Hon. Santa Alum (UPC, Oyam district). The MPs serve on the accountability committees of Public Accounts (PAC); Commission, Statutory Authorities and State Enterprises (COSASE); and Government Assurances and Implementation.
Hon. Gbajabiamila however cautioned the Opposition legislators to note the key difficulty faced in regards to supporting government positions on proposed laws, or in trying to work on a consensus on a government policy matter. He warned that important minority interests represented by the Opposition may feel aggrieved or neglected if consensus is easily reached.
“This could be a statesmanlike approach and in the national interest, but you face the possibility of negative perception of such stances by civil society and the citizenry which can be damaging to your status in the Opposition,” said Gbajabiamila.

Quoting a USAID/DFID study report, Gbajabiamila, said that internal challenges faced by the accountability committees in Uganda meant that their high level of activity never leads to results in terms of tasking government to fully account for its management of public expenditure.
He said that challenges the Public Accounts Committee, Local Government Accounts and Committee on Commissions, Statutory Authorities and State Enterprises faced included the slow consideration of Auditor General’s reports, the production of reports by the accountability committees and the time allocated for debate and adoption of committee reports.
Gbajabiamila suggested that a fixed timeframe be stipulated in the Parliament Rules of Procedure on the time accountability committees take to conclude their reports.

At the opening ceremony, the Shadow Minister of Internal Affairs, Hon. Muhammad Muwanga Kivumbi, said that Parliament stands at a vantage position to formulate policies and programmes necessary to change the current position and direction of Africa. He said that several years after her Independence, Africa remained the darkest continent with several challenges, many of which faced the continent during the pre independence years.
“In the coming years, Africa’s population of youth will be larger, all of them looking for jobs, services and a future. It is only Parliament that must come up with the necessary policies to cater for the needs of the youth,” said Hon. Kivumbi.
The workshop is intended to create a forum for Opposition MPs to discuss strategies that would facilitate unity and common sense of purpose and to discuss and design strategies for being an effective Opposition party.
ENDS