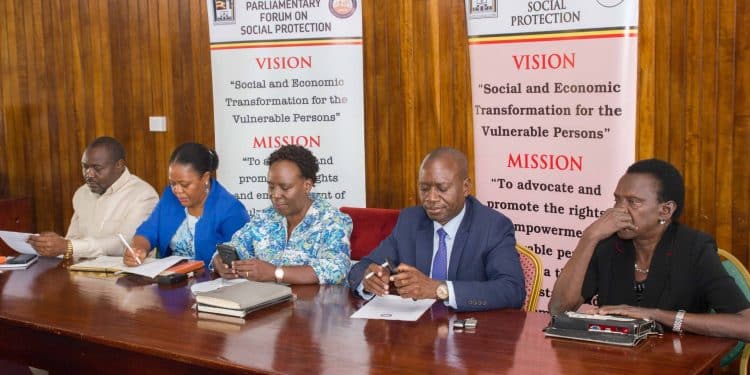 Budget for Older Persons Cut by 80%.

Members of Parliament have called upon the ministry of finance to reinstate budget cuts effected by the Social Assistance Grants For Empowerment,(SAGE) to save thousands of senior citizens from being left out of the social protection programs

The Social Assistance Grants for Empowerment (SAGE) program is among government programs that have suffered an 80% budget cut in the proposed 2023/2024 financial year budget. This social protection program which the government has been allocating 120.7bn in two financial years, funding has been cut to 24.26bn in the next financial year.

Addressing the press conference at parliament today, members of Parliament who sit on the parliamentary forum on social Protection led by their chairperson Flavia Kabahenda that with only 24bn the government will only reach out to 20% of the 306516 senior citizens in the country.

Under SAGE, the government extends Shs25,000 per month to every qualifying senior citizen of 80 years and above.  As the government grapples with funding the SAGE, MPs are instead calling for an increment of the payments to Shs30,000 and lowering the eligibility age to 75 years.

Legislators challenged the government that it’s embarrassing for the NRM government to celebrate its 37th anniversary while senior citizens who supported its way to power are ravaging poverty.

Meanwhile, other Social Protection Interventions have suffered similar budget cuts for example Funding for Special Grants for PWDs has been cut from 16.6bn to 3.32bn, Special Enterprise Grants for Older Persons from 5bn to 1bn, and  Food & Non-Food Items for PWDs in Rehabilitation from 0.33bn to 0.07bn. Other programs include Food & Non-Food Items for Children and Youth Institutions which have suffered a budget from 0.64bn to 0.13bn, Support to Street Children Interventions from 0.12bn to 0.02bn while Social Development Grant had been cut from 7.64bn to zero.

Legislators have urged govt to reverse the 80% cut on Subventions