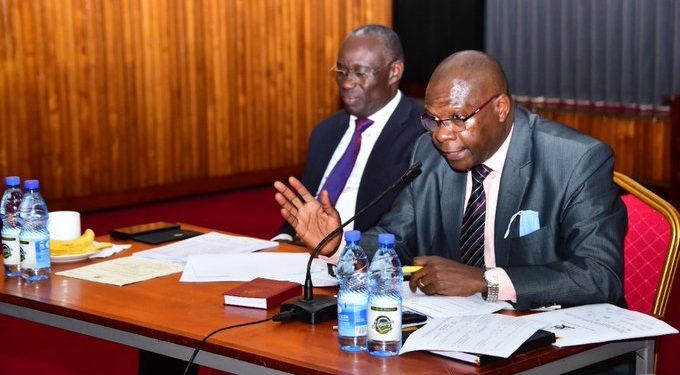 MPs Call For an Audit of The Consolidated Fund.

The budget committee of parliament has called for an audit into unspent balances that return to the consolidated fund at the end of the financial year, following  a discovery that 1.49tn was unspent in the financial year 2020/2021

Today the opposition presented responses to the 2022/23 financial year budget and punched holes in the government’s resource envelope and debt management plans.

Members sitting on the budget committee of parliament were left scratching their heads at the unaccounted-for funds swept from accounts of different ministries, departments, and agencies to the consolidated fund at the end of the financial year. The committee seeks to understand the fate of the unspent balances that varnish in the consolidated fund every year since it’s not captured anywhere in the budget.

This was after the shadow minister of finance Muhammad Muwanga Kivumbi who presented the opposition response to the annual Budget Estimates for the financial year 2022/2023, reported that in the financial year 2020/2021 over Shs1.49tn was unspent by government agencies but it was not accounted for.

The opposition has also decried the astronomical rise in the public debt; indicating that the government has been underreporting the public debt at Shs73.78tn as of October 2021 while the outstanding total public debt has escalated to Shs241tn. This includes Shs73.78tn for external and Domestic Debt, Shs160tn in contingency liabilities, and domestic arrears amounting to Shs4.65tn.

Kivumbi asked parliament to compel the government to table before Parliament the criteria used in selecting companies to  Benefit from government guarantees; after tabling before the budget committee a list of 19 private companies which the government has guaranteed to secure loans from international financial institutions to the tune Shs2.4tn.

The opposition budget report has also called for a halt on the allocation of funds to the microfinance support center until the Auditor general’s queries against the agency are addressed. The auditor general’s report indicates a lot of anomalies including lending out money to ineligible beneficiaries.

The ministry of finance has been summoned by the budget committee to respond to issues raised by the opposition.