HON. WAKAYIMA ARRESTED AS HE WAS TALKING TO COMMUNITY

Former Nansana municipality legislator, Hon. Wakayima Musoke (Democratic party)has been arrested by police as he was talking to his support in the town of Nansana in Wakiso district.

Hon. Wakayima who was ejected from parliament early July 2017 by court on grounds that his name Wakayima Musoke Nsereko does not exists in the voters register for Nansana municipality but rather Musoke Hannington Nsereko was valid in the register. Ruled, judge Vincent Ogwang and then court rule that Hon. Rob 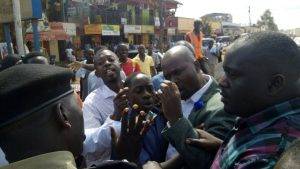 ert Sebunya of NRM was the MP for Nansana municipality.

Hon. Wakayima who has just started addressing his supporter in Nansana was then asked by police to stop his meeting which police said was not following the public order management act which he did not heed to.

Police then was forced to use reasonable force to arrest him which act met resistance from the supporters but eventually the former DP parliamentary representative was whisked away by police to an unkown police station.

There were earlier reports that he was planning to stage a demonstration to protest his ejection from parliament.