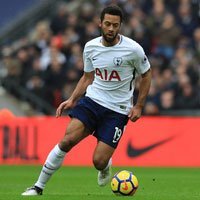 “I have said before that he is a genius of football,” said the Spurs boss of the Belgium international.

“I put him next to Ronaldinho, Maradona, (Jay-Jay) Okocha -– players that I was lucky to play with.

“For me he is one of the unbelievable talents in the history of football. Now he is in an amazing moment and for me he deserves all the praises that people are giving him.”

Those comments will certainly have raised a few eyebrows on both sides of the River Thames as Tottenham look to clamber above Chelsea and Liverpool, the teams directly above them in the Premier League.

The Argentinian has a full squad available with defender Toby Alderweireld the only doubt because of a hamstring problem sustained in a training session on Thursday.

The 28-year-old is Dembele’s international teammate and is expected to be a key figure in his nation’s attempts to win the World Cup for the first time this summer.

However contract negotiations have stalled to the extent that he could well be at another club by then and Pochettino made it clear he would be playing no part in the talks.

“It is not my job and I cannot say anything about that,” he said. “I am not involved in negotiations. I never talk about rumours, what the media say or what happens around the club.”

Pochettino developed a relationship with Palace manager Roy Hodgson when the latter was in charge of England, and regularly picked Spurs players.

Tottenham beat Palace 1-0 at Wembley in December when Hodgson was beginning to lift the Eagles out of relegation trouble, having succeeded Frank de Boer in September.

“Roy and his staff are doing a fantastic job,” Pochettino said.

“It will be good to see them again. But for me it will be a battle. We need to match them in the areas of motivation, ready to fight and then of course try to deliver our way and our game.

Palace’s hopes of putting distance between themselves and the bottom three have been hampered by a frustrating run of injuries that has deprived Hodgson of 12 senior players.

“It was always going to be a difficult game, even if I could resuscitate these 12 players and add them to those that we have to give us a very good squad, it would still be a tough game,” said Hodgson.

“Whatever way you look at it, we are a bottom-of-the-table team at the moment and they are a team chasing not only the Champions League honours, they are chasing second place in the league.”