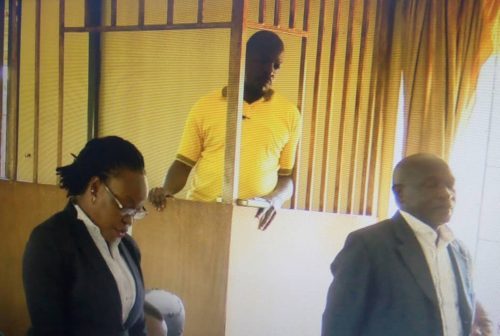 The Boda boda 2010 patron Abudallah Kitatta has now spent seven full months in prison since he was arrested at the end of january this year by soldiers from chieftancy of military intelligence. His father Alhajj Muhamood Nakugobahas been heavily broken by Kitatta’s long time detention since his son was taking good care of him.

Nakugoba says that he is sick but cant access health services as required since it was kitatta who used to buy him drugs.

But Hajji is now hopeful that his son will be released on bail soon since his lawyers have applied for bail for a second time in the General court martial.

Kitatta’s lawyer Sienna Owomugisha has today asked the Military court to grant bail to his client who is accused of
Illegal possession of fire arms and illegal possession of military stores on grounds ;Presumption of innocence till proved guilty, the fact that Cases levied agaist Kitatta are bailable by this court, Kitatta’s deteriorating illness which require access to specialized treatment and being the sole bread winner of three wives and children, that have suffered a lot during his detention

She submitted that kitatta has three permanent places of aboard Nakasajja, Masanyalaze zone-Najjanankubi and Nkokonjeru cell Kabojja parish Nsangi. Which are in the jurisdiction of the presiding court and presented three surites Sulaiman Walusimbi, Muhammad Kibirige and MATOVU Abu.

Case adjourned to 17th September to allow prosecution time to respond to the bail application.

Surites asked court to depend on the precedent set by the general court martial when it granted Gen. Kale Kayihura Bail to grant Kitatta freedom however the court chairperson Lt Gen. Andre Gutti told them off that the two cases are different.

The first time Kitatta asked for bail in may this year it was denied on grounds that he was likely to interfere with investigations.