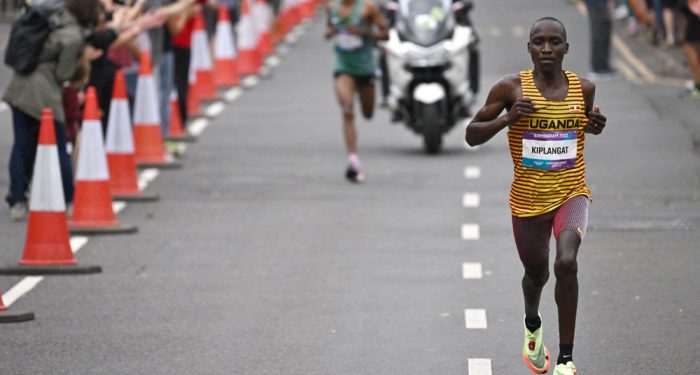 Fresh from winning the Belgian-half marathon championship earlier this year, Kiplangat produced one of the most outstanding performances to beat a strong field and win Uganda’s first medal at the Games.

He crossed the finishing line 2 hours and 10:55 to beat competition from Tanzania’s Alphonce Simbu who took silver, while Kenya’s Michael Githae bagged a bronze medal.

After the 32 kilometers, Kiplangat had already peeled the way and taken the lead, from then he was barely seen by his closest opponents.

But there was late drama when Kiplangat took the wrong line in the closing kilometer, luckily he was guided and turned around and backtracked in a maneuver that cost him perhaps 20 seconds. Luckily his lead was more than enough not to threaten his gold. He becomes the first Ugandan to win gold in the 42 kilometers race at a Commonwealth Games.

Earlier Uganda Rugby Cranes also defeated Jamaica 40-0 in a Group D match at the Commonwealth Games. The team started with a loss to Kenya, before holding giants Australia to a 12-12 draw last night.

But the Uganda Rugby Cranes will only battle for placements after completing the group with just 5 points below Australia which has eight points, and Kenya which has sevens points. The top two teams qualify for the knockout stage.

Uganda wins big in EAC inter- Parliamentary games. Uganda has dominated and is poised to reclaim all titles in the...