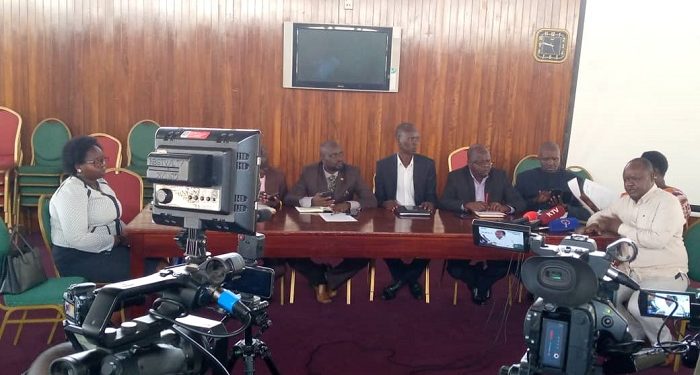 Members of Karamoja Parliamentary Group have come-out to declare full support of government in the ongoing operations to disarm cattle rustlers in Karamoja Sub- region saying they have started witnessing sigh of relief after gross insecurity.

However they have called for change of strategy to minimize human rights violations in the  disarmament operations.

In July 2021 security agencies launched the operation code named Usalaama Kwawote to restore stability in the volatile Karamoja Sub-region by dealing with cattle rustlers but MPs from Karamoja have had reservations on these operations until today.

While addressing the press conference at Parliament , members of the Karamoja Parliamentary caucus have announced their full support for the ongoing disarmament operations in Karamoja saying the region is seeing restoration of peace which have been absent in the region for a while.

Led by Karamoja Parliamentary Group Chairperson Lemegio Achia, legislators have applauded president Museveni and UPDF third division for reigning over the insecurity that have claimed lots of lives.

While they support the disarmament operations,  Karamoja legislators have appealed to  UPDF and Police to avoid elements of torture and prolonged detention of suspects in their operations.

The have called upon security agencies to quickly sit with, MPs, RDCs and DISOs to agree on operational guidelines in order minimizes atrocities and human rights violations.

They have also called for intelligence led operations to a a void arrests of innocent people and immediate screening of the arrested suspects.

On May 19, parliament approved a supplementary budget of Shs87.3bn to facilitate UPDF operations in Karamoja.