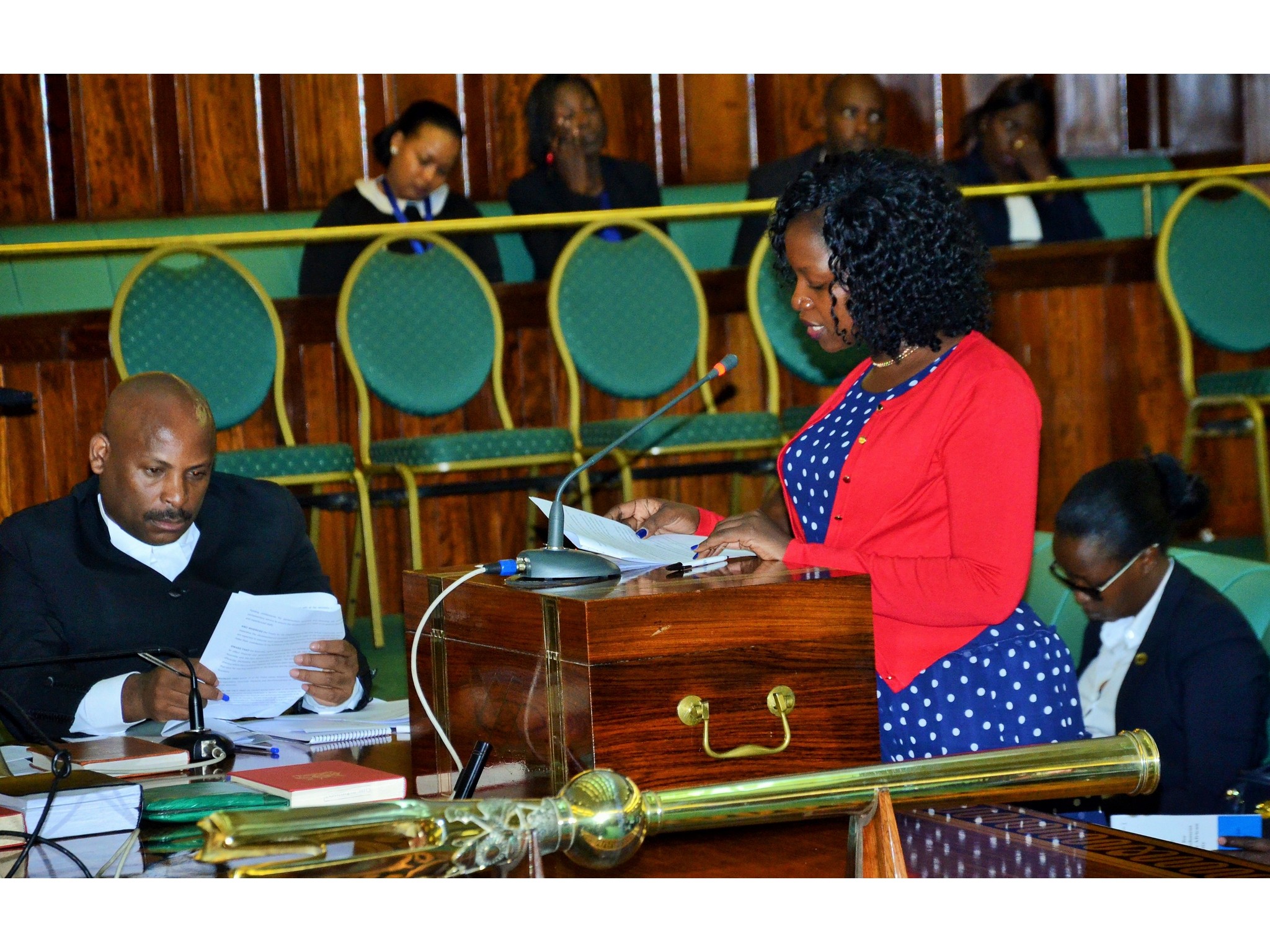 EALA is resolute that it will operationalize the financial and administrative autonomy granted to it by the Council of Ministers two years ago (2016).   In the wake of this, the Assembly at plenary today passed a Resolution directing the (EALA) Commission to come up with all the necessary instruments to fully achieve the objectives for which it was established including enhancing terms and conditions of service of both Members and staff of the Assembly as well as appropriate staffing. In passing the Resolution, the Assembly therefore adopted performance contracting as a scheme of service in the Assembly as opposed to the two term limits for its professional/technical members of staff.

The Resolution to adopt and operationalise the financial and administrative autonomy of the EALA was moved by Hon Susan Nakawuki Nsambu, seconded by Hon Oda Gasinzigwa and supported by many Members.

The Assembly noted that it is already empowered under Articles 49 and 132 of the Treaty, through the Administration of the East African Legislative Assembly Act, 2012, and the EALA Rules of Procedure to, exercise such powers as granted in the afore-mentioned decision of the Council – this being through the EALA Commission, the Assembly Committees’ and the Plenary.

In the same regard, the House is moving to retain the services of members of staff whose final contracts are due to expire in April 2018 until such a time when they are subjected to performance contracting.

At debate time, Hon Abdikadir Aden said the mandate of the Assembly was key in the integration process, adding that autonomy in terms of administrative ability to organise its work remained fundamental.   He said, it was imperative to amend the Treaty in order to move in tandem with the dynamics of integration. He termed the staff as the “institutional memory of the Assembly” and said staff retention was a practice across Parliaments in the globe.

The Chair of the Council of Ministers, Hon Julius Wandera Maganda said the matter of autonomy touched on the operations of the Community and asked for amendment of the Resolution in that regard, to bring the matter to the Council of Ministers.   He maintained the Council had produced some documents on the institutional review and the re-evaluation of the EALA and EACJ was understudy as well. The Chair of Council reiterated that autonomy was conditional and stated the EAC Secretariat was directed to come up with a paper defining the scope of the autonomy from its perspective. He remarked that the issue of term limits need legal and policy issues touching on the Treaty amendment as well.  The CTC to the Community re-affirmed the scope of autonomy was conditional and that certain areas including the financial rules and regulations and staff rules could be reviewed and revisited. However, he reiterated that some of the matters were subject to amendment of the Treaty for the Establishment of the EAC.

Hon Mukasa Mbidde however said the basis of the Resolution was as a result of a directive of the Council of Ministers itself.  “The motion is further well within the dictates of the Treaty’s Article 49 and we need the Commission to establish the benchmarks with a view to implementing the rules as laid out by the Treaty”, he said.   “Autonomy does not mean we shall erase the principle of complementarity but in pursuit to the directive made by the Council of Ministers”, he added.

On his part, Hon Chris Opoka said independence matters (of Executive, Judiciary and Legislature) were embedded on the principle of separation of powers.  Hon Opoka reiterated that Council of Ministers can give direction to Partner States and a number of Organs and Institutions other than the Summit, Court and Assembly as per Article 14 (3) (c ) of the EAC Treaty.   “When Council gave the financial and institutional autonomy to the Legislature in 2016, they were indeed correcting a wrong.   The wheel of Council grinds very slowly and we need to have a timeline when the report of the Institutional Review shall be completed and reported”, he said, adding both the legislature and judiciary will function effectively and efficiently when such autonomy is granted.

Hon Abdullah Makame reminded the House the Budget was an Act that could not be shifted midway and sought clarification if granting financial autonomy would interfere with the process.  “We commend Council for creation of the new position of Deputy Clerk in charge of Finance and Administration’, he said. We can task the Council to table and dispense with the matter soonest at the next Council of Ministers, he added. “I am confident that Council is aware of the importance of this matter”.

According to Hon Wanjiku Muhia the Council of Ministers had already made policy decision on the matter.   “The institution (EALA) is well over 15 years and now needs some structures to move it forward. Legislators provide oversight and their role should not be arm-twisted. We must not let EALA be a training ground for staff – but there must be some certainty as they undertake their work,” she said.

Hon Aden Noor said the full autonomy of the House was critical. “It is a tradition and practice of the House in Parliaments globally to legislate and oversight.  This needs to be done in an objective way and all three arms should have separation of powers,” he remarked.  “The House should for example be able to appoint its own Clerk, Hon Noor reiterated. “We are not in competition with any other Organ but a complimentary role”.

Hon Denis Namara said the Partner States’ constitutions supercede the EAC Treaty and that it recognised the separation of powers.  “We need to follow this as well at the EAC”, he added.

Hon George Odongo said total independence of the Assembly in dispensing legislative, oversight and representative function need to be enhanced and there was need to look at it with lenses of objectivity.

Hon Fatuma Ibrahim Ali said the operations of the Assembly should mirror that of the National Parliaments in line with Article 65 of the EAC Treaty.   “This has been clearly stated by eminent persons including those who have addressed us (EALA) at the induction programme of the 4th Assembly. (ref article 71). The motion is timely for us to take off on a platform”, Hon Ali said.

Hon Kasamba Mathias said EALA’s independence means it would work better with the Council of Ministers.  “We need the Commission to finalise the matter within a timeframe of 6 months”, he remarked.

Hon Josephine Lemoyaan termed the motion courageous and timely and said an autonomous EALA was key.  “We are part of the EAC system – however, we need to be critical about the burden we have in terms of the framework of autonomy.  The second part concerns staff whose contracts will end in April 2018.  The House must consider quickly how it shall address the matter’”, the legislator.

Hon Dr Ngwaru Maghembe tasked the Counsel to the Community to clarify to the House whether the directive of the Council of Ministers that gave autonomy was conditional and subject to the finalisation of tasks assigned to the EAC Secretariat.  He nevertheless supported the move.

Hon Amb Fatuma Ndangiza termed the debate clear granting full administrative and financial autonomy and said there was need to swiftly move on with the decision.  “As Chair of the Legal Rules and Privileges Committee, I shall ensure you deliver on the implementation of the decision.  It is in the interest of the Council of Ministers to have an effective Legislature,” she said.

Hon Florence Jematiah said the House needed to speedily move – given the fact that five years is a very short period in which to leave a formidable legacy.

Hon Gideon Thoar was emphatic the Resolution in debate was related in toto to the operationalisation of the autonomy, a principle which had already being directed and granted by the Assembly.

Hon Mary Mugyenyi supported the motion and said it was overdue having been approved by the Council of Ministers. “I thank the Chair of Council for stating it (Council) was not against the idea.  The EAC can only grow by empowering the different Organs to be independent. A conflict of roles between the officers within Organs and Institutions can cause challenges and there is need for all to access resources”, she said.

Hon Simon Mbugua said the essence of Parliament lay in independence.  “Mr Speaker, you must take charge in steering the bus of the Assembly. We are representatives of the people and we must deliver to that mandate”, he said.

Hon Adam Kimbisa supported the motion citing efficiency, effectiveness of the Assembly as the hallmark of autonomy.   “The matter is long overdue,” he added.

The mover of the Resolution, Hon Susan Nakawuki said intense lobbying has shown the matter has support of the Summit of EAC Heads of State and remarked that the paper which the Council required from the Secretariat could easily be done by the EALA Commission.