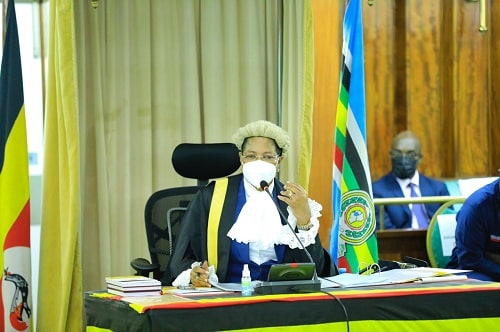 The speaker of parliament Anita Among has directed the minister of finance Matia Kasaija to appear before parliament on Tuesday next week and explain why up to today several government agencies have not paid the water bills amounting to over 50 billion in the current financial year.

The speaker’s directive came just after a complaint from the leader of the opposition Mathias Mpuuga Nsamba who called on parliament to intervene saying many government agencies are not paying water bills because their non-wage budgets were suppressed.

Mpuuga read to parliament a list of government entities owing National Water and Sewerage Corporation up to 50bn shillings in arrears of unpaid water bills including Hospitals, Police, UPDF and Prisons.

However the Speaker Anita Among was not convinced and tasked government to take an urgent action before the minister of finance presents a statement.

MPs expressed displeasure over failure by government agencies to pay water bills yet the house appropriated enough money for such activities.

Last Week, the Public Procurement and Disposal of Public Assets-PPDA executive directors Benson Turamye told the committee of Finance that they were forced to cut in the number of staff that report at work after accumulating over Shs41M arrears in water and electricity bills. The agency has only received 10% of the non wage expenditure budget.