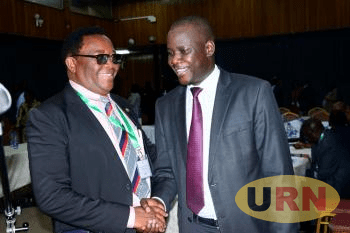 By URN.
The former speakers of the East African Legislative Assembly-EALA have cautioned the newly elected EALA legislators to avoid carrying the individual positions of their countries to the assembly but instead focus on the bigger issues of the East African Community.

Abdi Abdirahin, the former speaker of the second EALA Assembly and Dan Kidega, the speaker of the 3rd assembly made the appeal while addressing the members of the fourth assembly in Kampala on Wednesday.

Kidega said there is need for the lawmakers to avoid pushing positions of their individual countries, saying they represent the people of east Africa.

On his part, Abdi Abdirahin, said it is incumbent on the new EALA representatives to separate issues of their individual states from Community work.

Abdi, who recounted the leadership disputes that led to the censure of Margaret Zziwa and subsequent election of Kidega in the third EALA assembly, said there is no way the Assembly will represent East Africans and work for integration without accommodating each other and ensuring the community moves forward.

The sentiments of the two former EALA speakers are not any different from those of president, Yoweri Museveni who is also the incumbent chair of the East African Community Summit. On Tuesday, Museveni appealed t the legislators to drop individual interests and provide leadership to East Africans.

The business of the 4th EALA assembly is behind schedule since Kenya took time to agree on its representatives to the Assembly. The assembly was delayed further when South Sudan, the newest member also revoked the nomination of its representatives because they were appointed through a presidential decree as opposed to being elected.

They were later confirmed by the National Assembly. Even with these delays, the Assembly’s first order of business suffered a stalemate in December 2017 since Rwanda and Burundi couldn’t agree on whose turn it was to occupy the speakership. They later agreed leading to the election of Rwanda’s Martin Ngoga as the new EALA Speaker.