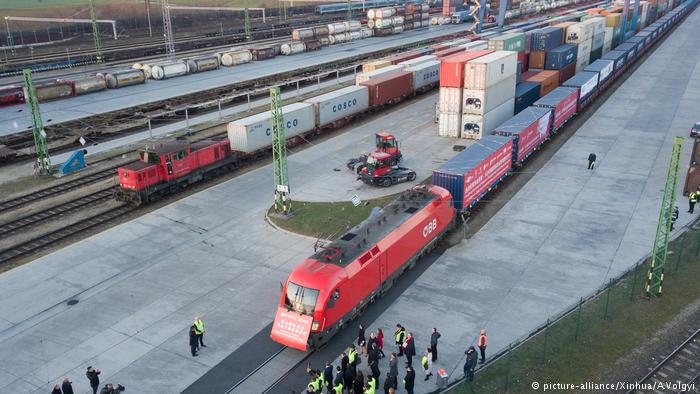 China’s Li Keqiang pushes trade with Eastern Europe amid EU concerns
The Chinese premier is meeting with leaders from Central and Eastern European countries at a summit in Sofia as he aims to boost Beijing’s trade interests in the region. But Li cannot afford to offend the European Union.

The Xiang Ou Express Budapest-Changsha return freight train in Budapest
Chinese Prime Minister Li Keqiang seeks to expand business and trade ties with Central and Eastern European countries at a summit in the Bulgarian capital on Saturday. But Li must reassure the European Union that Beijing is not trying to divide the 28-nation European bloc.

Li’s participation in the seventh “16+1” summit coincides with an escalating trade row with the United States. On Friday, the US and China slapped tariffs on $34 billion (€29 billion) worth of the other’s imports.

China also threatened it could launch “the biggest trade war in history.”

‘By no means a geopolitical platform’

China, which seeks the EU’s support in its trade battles with US President Donald Trump, has thus been careful in its dealing with Central and Eastern European nations.

“The 16+1 cooperation is by no means a geopolitical platform. Some say such cooperation may separate the EU, but this is not true,” Li told a joint press conference on Friday with Bulgarian Prime Minister Boyko Borissov.

“We hope that through our cooperation, we will improve the development of all countries involved and help them better integrate into the European integration process,” said Li, who will visit Germany after the summit.

Besides China, the 16 countries that participate in the summit include EU members Bulgaria, Croatia, the Czech Republic, Estonia, Hungary, Latvia, Lithuania, Poland, Romania, Slovakia and Slovenia, as well as non-EU states Albania, Bosnia and Herzegovina, Macedonia, Montenegro and Serbia.

Importance of EU for China

Ever since its launch in 2012, the format has been viewed by Western critics as an instrument for Beijing to divide and undermine the EU by dangling the CEE states closer trade and investment opportunities with China.

But analysts say that in Sofia, the Chinese premier will try to avoid issues that might irk western capitals and the European Commission in Brussels.

“I think that Premier Li Keqiang will adopt a low profile on the issues that might infringe on community affairs of the EU this time around,” Francois Godement, director of Asia and China program at the European Council of Foreign Relations, told Reuters news agency.

Watch video02:04
On the brink of a ‘trade war’
Despite the substantial rise in Chinese investment in CEE nations in recent years, the region accounts for less than 10 percent of total Chinese money inflows into Europe. Most Chinese investment still goes to Western European countries like the United Kingdom, Germany, France and Italy.

The EU and the United States, meanwhile, account for around 90 percent of investment flows to the CEE region, highlighting their far greater importance to the region.

Read more: Is China on course with ‘Made in China 2025’ amid trade row with US?

With Trump adopting protectionist trade and economic policies, China is increasingly positioning itself as a proponent of free trade.

Li said on Saturday that Beijing will stay on the path of economic reform, and would be more flexible about allowing foreign products to enter its domestic market.