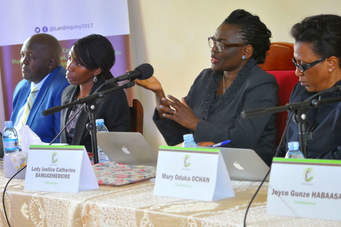 The Land Probe Commission Chairperson Justice Catherine Bamugemereire has expressed concern over the way the Commission work is being incapacitated due to lack of operational funds.

Justice Bamugemereire says she had decided to keep calm about it for four months now, but she discovered that the Commission budget was actually left out and not considered at all, and as a result of this some of the staff have decided to leave without pay.

This as the Seven Member Commission had convened this morning to resume its public hearings at the Offices in Wandegeya.

The Commission Chair is also concerned about the Land evictions that she watched on TV last night that claimed to have the permission of the Land Probe Commission whereas not.

She maintains that her Commission has never allowed any eviction especially if the matter was arising out of a Court case, and she can never condone evictions being carried out in the wee hours of the night and in the early mornings.

All she remembers is that she said no when she was consulted before the unfortunate incident.

The commission that is in its second year of investigation has had a series of financial set backs during its tenure but has persisted to see that it serves the vulnerable communities in Uganda.