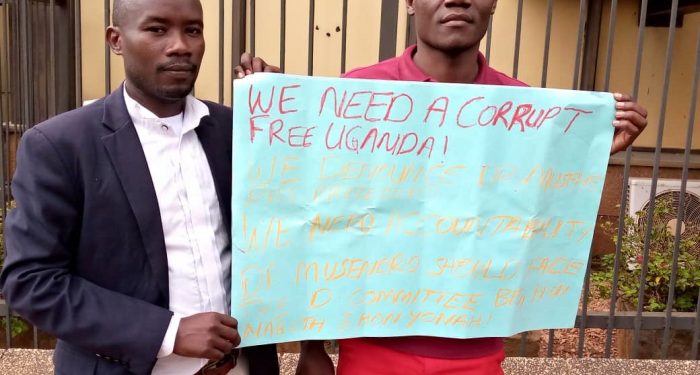 Activists have piled pressure on the Minister of Science, Technology, and Innovation Dr. Monica Musenero to step aside as she was directed by parliament to allow the Inspector General of Government (IGG) to investigate the alleged misappropriation of funds for COVID-19 related research and vaccine development.

MPs vow to move a censure motion against the two ministers Monica Musenero and Persis Namuganza if they don’t step aside as they were directed by parliament.

On May 17, Parliament adopted a select committee report calling on the Minister for Science and Technology Dr. Monica Musenero to step aside for alleged mismanagement of Funds for COVID-19 related research and asked the IGG to investigate her.

However, 10 days down the road Musenero has remained in office in disregard of the parliamentary resolution. Today, activists hailing from the Bukedi Sub-Region have addressed the press conference in Kampala and demanded the voluntary resignation of Science, Technology, and Innovation Minister Dr. Monica Musenero.

Musenero was recently implicated by the parliamentary select committee report for failure to account for funds that were meant to facilitate Covid-19 research activities and vaccine development. Activists have called on the Inspector General of Government to expedite the probe.

In parliament, MPs are concerned with the two ministers Monica Musenero and Persis Namuganza who have defied parliamentary resolutions to step down to allow investigations against them to take the course. Lawmakers Asuman Basalirwa of Bugiri Municipality and Robert Migadde of Buvuma islands noted that once the house resumes in the second session before the duo leaves office, they will be moved to censure the duo.

Legislators have also implored the President to take action against his ministers that have been implicated in corruption scandals to boost the corruption fight.

Naamganza the minister of state for Housing was implicated by the Dan Atwijukire-led Ad hoc committee on abuse of office.