2021 Results Should Reflect People’s Will. US

The US ambassador to Uganda H.E. Richard Nelson is asking the Uganda government and the electoral commission to ensure that the 2021 electoral results reflect the people’s will to avoid any likelihood of electoral violence.

Speaking at a high level dialogue on 2021 general elections today in Kampala organized by the NGO forum, Nelson reminded Uganda that violent election come along with high costs which are very hard and expensive to pay and urges Uganda to look forward to having a peaceful election.To achieve this, USA is calling on the govt of Uganda to hold a peaceful, transparent, free and fair election as this will maintain and boost economic and social development of Uganda.

He further demands that the result must reflect the will of the people as this will exhibit Uganda as a true democratic country.

He also reminds Ugandans that its every one’s responsibility to have a credible, peaceful and transparent election in 2021.

But the UN human rights special rapporteur to Uganda, Margaret Ssekajja is asking the electoral commission to take full charge of the exercise and not allow the security organs and the incumbent take over its mandate and powers if the country is to have a peaceful election.

Ssekajja in reference to the 1996 commission, she stated that the then commission chairman Stephen Akabwai took charge of the country and was giving directions on how political parties would be behave and was the one to permit police or any security organ to speak or give orders.

Ssekajja further stated that they used to joke, telling Akabwai that he was the president then following the powers he had then. The commissioners were sent to various districts across the country to over see the whole exercise as this enabled the commission make reports and take control of the whole exercise and to Ssekajja, this is not the case like today.

She further advised the judiciary to set up better and prepared systems to handle any electoral petitions as they come before them.

On several occasions the police has been seen giving directives to candidates mainly on the opposition on what and not what to do as they move around the country campaigning and this has resulted into running battles between them and the supporters of these candidates.

Police Asked Not To Detain Females With Males. 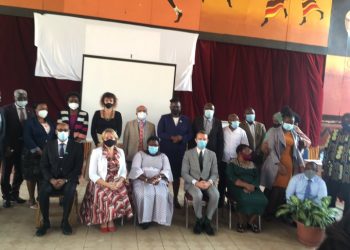 Police Asked Not To Detain Females With Males.