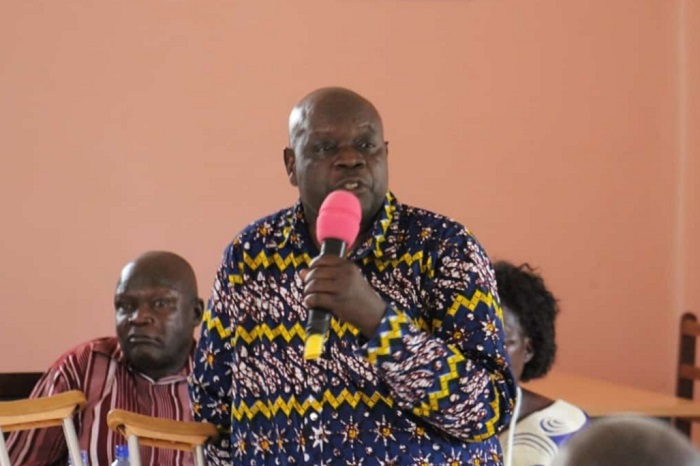 Tribute to The Late George Omona

The sub-region of Acholi has been hit by the deaths of some of their very prominent sons. The ,prolific ”Nanga” instrument player, Ogwang Kilipa , and Rwot Odida Francis passed away and was buried recently. Last Thursday, we woke to the sad news of the death of Mr. George Omona who had been hospitalized at St. Mary’s hospital, Lacor in Gulu. He will be laid to rest at his home in Palenga on Wednesday, 7th October.

Mr. Omona came to national prominence because of his work with children in armed conflict especially children who escaped from LRA captivity. As Program Coordinator of Gulu Support the Children Organization (GUSCO), he helped to ensure that the formerly abducted children were provided psychosocial support, education and reintegrated back into their communities. His advocacy work with the children won him the Anti-Slavery International award in 2000.

The late Omona was very influential in the Civil Society Organization work in Northern Uganda. With a background in Education, from where he joined ACORD, Uganda in the early ’90s. The Leader of Opposition and Woman Member of Parliament, Hon. Betty Aol Ocan worked together with Mr. Omona as Rural Development Workers of ACORD. He was then promoted as Gender Officer and tasked with mainstreaming gender in their programs, creating awareness on gender-based violence in communities. Ten years after joining ACORD, Mr. Omona became its director with the UK-based organization shifting its headquarters to Nairobi. He served as the director for eight years and his service had a great impact in Northern Uganda and the entire country. His dedication and commitment to work especially with young people will be talked about for long. As a teacher, he taught many students who have become prominent people in society. As Program Coordinator at GUSCO and Director at ACORD he mentored many interns, junior and senior staff members who went on to make great achievements and promotions in their workplaces.

Having Graduated with a Bachelor of Education at Makerere University in 1980, Mr. Omona started his teaching career from Kitgum High School and later Lacor Minor Seminary and transitioned to NGO work as Rural Development Worker at ACORD, with its headquarters in London at the time

Mr. Kibwota Wilfred, A monitoring and Evaluation (M&E) expert who worked with the late Omona describes him as a man who had a unique personality. He was very passionate about work and practical as well. He never took anything for granted. The kind of training missing in today’s social Work studies is what he emphasized. Even as the top person in the organization, he would go into the communities and take part in community events. He had compassion for children and was concern about the young generation. He built many people’s capacities in different fields. He truly left a great legacy.

The Country Director, Oxfam in Uganda, Mr. Odokorach Shanty Francis paid glowing tributes to the late George Omona saying, ” Although I arrived some months after he left GUSCO, Mr. Omona steered the organisation to it’s peak. He was known as a principled man, very diligent and honest.

Deeply saddening to the humanitarian fraternity of his loss.”

Deeply saddening to the humanitarian fraternity of his loss.

Eng. Moses Onono who owns Homa Farm and Training Institution in Omel, Gulu says the late George Omona was a man of great honesty and hard work. There are not many people like him in Acholi and Uganda. His departure from this world is a big loss to our community and the country as well.

Hon. Aol Betty Ocan (LOP) remembers the late Omona as a man who was dedicated to working and worked tirelessly even without supervision. He was a scientist who loved teaching Chemistry to his students.  His brother, the late Caxton taught Chemistry at St. Joseph’s College Layibi at the time Mrs. Ocan was a teacher at the same school. It is their work at ACORD and being neighbors at their residences in Senior Quarters, Gulu that brought their families much closer. We are relatives by heart and good relations. He mentored children and the youth in his neighborhood without discrimination. He encouraged the children to have a focus in life by working hard and “settling down properly” which he meant having a wedding in church instead of just cohabiting.

In addition, the late Omona offered consultancy services on a number of projects but most importantly in 2007, he facilitated the Acholi Peace Conference in Juba as contracted by DANIDA HUGGO. This eventually led to relative peace in Northern Uganda. He also participated in developing a Technical and Financial proposal for the construction of the School for war-affected children at Laroo in Gulu contracted by the Belgian Technical Cooperation.

At the time of his death, the late Mr. Omona was still a member of the Omoro District Service Commission where he became a member in 2017. He was also Director of the Pope Benedict XVI integrated schools. He founded the school in Palenga to continue to support the young generation and especially the children of formerly abducted children who are majorly supported by the organization, Sponsoring Uganda through Els DeTemmerman author of Aboke Girls. Mr. Omona would still teach like any other teacher in the school. In his retirement spending time with the children at his school was what made him happy. Some of the people he mentored visited him once in a while but the support of friends of the school in Belgium gave it a boost.

When Omoro was elevated into a new district instead of pushing on with partisan politics. Born 06/ 05/1956, at 64 years, the late George Omona achieved so much that many people can only dream about. He had a great career, family children and grandchildren as well as many people he looked after

He also contested in the NRM primaries in Omoro County against the Rt. Hon. Jacob Oulanyah, the Deputy Speaker of Parliament in 2011. He was gracious in defeat and opted to serve elsewhere in the Omoro district service commission when Omoro was elevated into a new district instead of pushing on with partisan politics