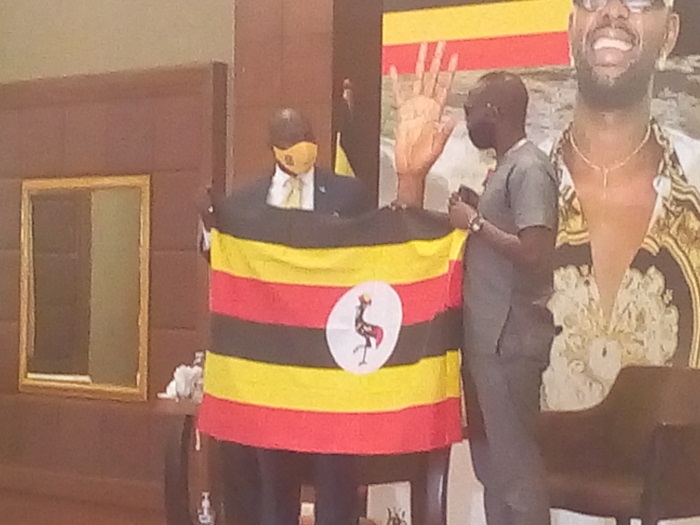 Uganda’s popular Musician, Eddy Kenzo has been unveiled as the new tourism ambassador of Uganda. This was during a press briefing organized at Kampala Sheraton hotel by the Uganda Tourism Board (UTB)

Speaking during the unveiling, the state minister for Tourism, Hon. Godfrey Kiwanda said that “because Eddy Kenzo’s music has been very instrumental in bridging many gaps and bring Uganda international recognition through the many awards given to Him.

“We have deemed it wise to make him our new tourism ambassador.”  that Uganda needs influential people like Kenzo to market her to the outside world so as to attract more visitors that will come in with high foreign exchange and create more jobs to the sector players,”Kiwanda said.

Therefore Kenzo’s appointment comes at a very critical time when the country needs him most the minister noted.

He concluded his remarks by praising the current government for maintaining peace without which tourism cannot blossom.

In his remarks, Kenzo, acknowledged God by appreciating Him for lifting him up from low life to prominence that now he’s being recognized for his input in making Uganda proud. He pledged to use this new position as the tourism ambassador to market the country more and help fulfill the dreams of the ghetto youth.

He called upon the youth to join him as he explores the country and give him advice on how best he can promote Uganda and her interests.

Currently, Kenzo has over 1.35 Million YouTube subscribers and a huge following on his social media handles.