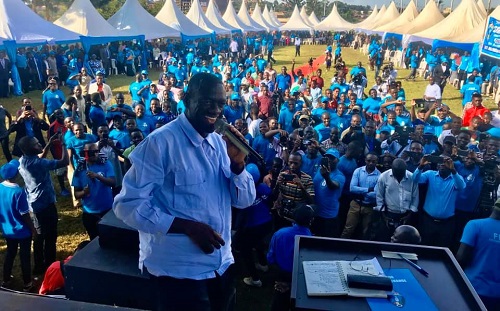 There was Commotion at party headquarters as FDC supporters mainly youths became unruly and disrupted the event; chanting that they can’t imagine an election in 2021 without Besigye as a candidate.

Dr. Besigye was scheduled to deliver address FDC supporters as the party concludes the process of receiving aspirants for the party presidential candidate. However, his speech was delayed for close to 20 minutes after a group of supporters blocked his address demanding his nomination to enable him to stand for president in 2021.

The development ends speculation over whether the four-time opposition presidential candidate will be contesting against his long-time nemesis -the incumbent, Gen. Yoweri Museveni.

The choice for FDC party presidential flag-bearer will now be a contest between Amb. Wasswa Birigwa and Party president Hon Patrick Oboi Amuriat.

Dr. Besigye was received with a blue-carpet welcome at party headquarters amidst chants from supporters who hoped he would make a last-minute announcement and pick nominations for the position.

In his speech, Dr. Besigye said he has relentlessly fought to dislodge the ruling National Resistance Movement (NRM) government, but it is time to let others lead the fight. Besigye said he has never lost the vote in all the elections he has contested against Museveni only that he has been denied access to power.

He applauded both Amuriat and Birigwa for their aspirations for the FDC flag warning that critics who are despising them are set for a rude shock.

Besigye said he absolutely has no doubt the two (Birigwa and Amuriat) have the potential to compete and win the presidency of Uganda.