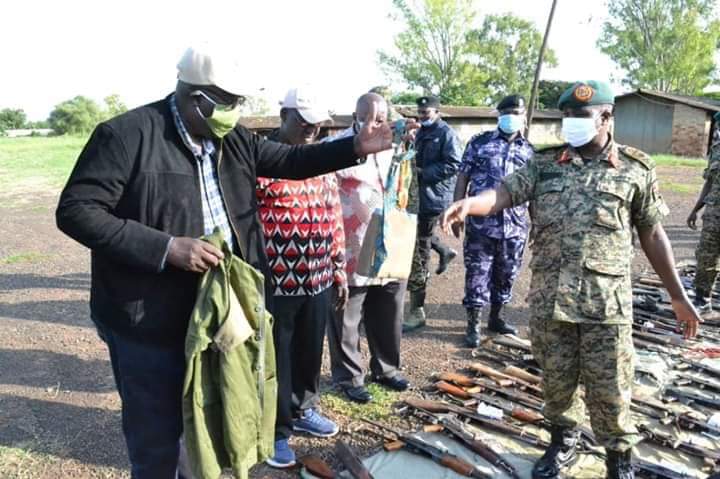 The leaders of the 9 Districts that form Karamoja region have unanimously agreed that the context of cattle rustling in the sub-region tantamount to aggregated robbery and that the implementors of the law should consider charging the culprits as such.

They said cattle rustlers in Karamoja use fire arms and other lethal weapon such as bows and arrows against innocent civilians and security personnel while robbing livestock; an act that tantamount to aggravated robbery.

This decision was reached at during a meeting at Moroto District Council Chambers with the visiting State Minister of Defence in Charge of General Duties Hon (Rtd) Col Charles Okello Engola. Key in the meeting were the State Minister in Charge of Karamoja Affairs Hon Moses Kizige, Minister of Ethics and Integrity Hon Fr Simon Lokodo and other elected political leaders. Present were also members of the district security committees, council of elders and opinion leaders.

Hon Rtd Col Okello Engola informed members that the purpose of his visit to Karamoja was to gather views of all stake holders which will form recommendations to find lasting solutions to the recurrent violence and insecurity in the sub-region.

Participants informed the Minister that the sub-region had experienced relative peace for 15 years since the disarmament programme of 2003 but from September 2019 to date, the security in the region has deteriorated characterised by cattle rustling and killing of people.

A number of views and recommendations were aired out which included; Leaders agreed to work together to condemn cattle thefts and sensitize their people on the dangers of possessing illegal guns, control livestock trade in Karamoja to curtail commercial cattle rustling, reveal individuals with illegal guns and punish ring leaders.

Other recommendations included the use of bilateral means to stop rearmament by the Turkan and Topoth of Kenya and S. Sudan respectively.

In order to avoid exaggeration of stolen animals by the owners, the meeting agreed that security personnel guarding the kraals should routinely take stock of the livestock in the kraal and the forward the numbers to the RDCs and to the Minister in Charge of Karamoja Affairs.

The meeting also agreed on the empowerment of Military Intelligence to track phones of robbers. Other recommendations were to recruit more LDUs and improve on their remuneration to avoid high turnover and lastly, to arrange Karamoja consultative dialogue meeting which will bring all stakeholders together.