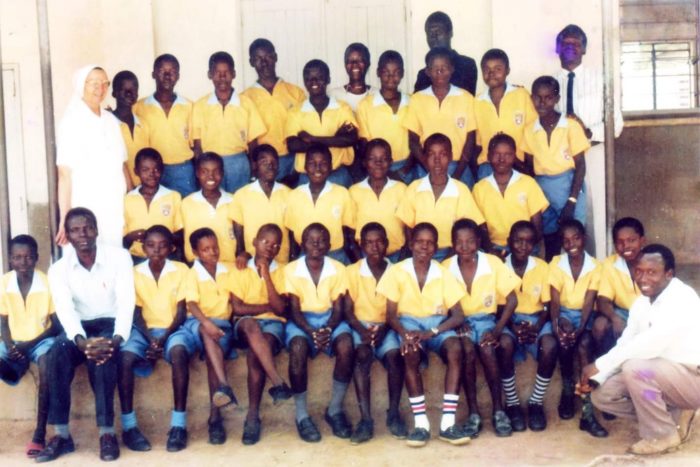 WHAT IS HAPPENING TO TRADITIONAL SCHOOLS IN NORTHERN UGANDA?

Recently the former Principal Private Secretary to the President and now State Minister for Economic Monitoring, Hon. Molly Nawe Kamukama was interviewed in one of the dailies over a wide range of issues on politics, what will the economy be like post COVID-19. What caught my attention most was her views on education. She said school children in Kazo have of late not been passing well. “We must work on the decline to improve as a community’’

This reminded me of recent experiences when traveling to Kampala at the beginning of the school or going back to Gulu when schools have closed. Being able to secure a ticket to travel becomes nearly impossible. Parents who have some means no longer faith in  Gulu schools and prefer to get good education for their children from Kampala, Wakiso, Mukono, Masaka etc. This is a big problem that politicians from the North should get concerned.

In terms of primary school, Bishop Angelo Negri Primary School run by the Comboni Missionary Sisters then had a tradition of academic excellence. Negri Primary always ranked among the best schools in the country. It is worthy to note to some important people making serious contributions who went through the great school and ask why parents are no longer keen to take their children to study from there.

The Accountant General, Semakula Lawrence is an old boy and so is Sam Ayo of Capital FM who was his classmate in the early 1980’s. Lawrence never forgot his former headmistress, Sr. Veronica Landonio. He made every effort to always visit her at their convent in Namugongo before she was taken back to Italy three years ago due to old age. Sr. Veronica made 98 years this year and the old boys are happy to know that she is well in-spite of the Corona-virus pandemic that killed thousands of people in Italy. Hon. Richard Towdwong, the NRM Party Deputy Secretary General, Hon. Odonga Otto are renown politicians who were students at the once popular school. Victor Acellam ( rose from Foreign Officer to become  Chief of Protocol and now First Secretary at Uganda’s mission in Rome), Ocitti Sunday Paul Labeja who works at the Joint Clinical Research Center is known for his academic excellence from Negri Primary then Negri College and then to St. Mary’s College Kisubi where brilliance was talked about a lot. At the national exams for UNEB he was rated number 2 have scored 3As in his Physics, Chemistry and Maths combination. Onen Patrick Ezaga, was Director of the Emmaus Foundation that oversees schools and organizations that the late Fr. John Scalabrini founded. Bishop Angelo Negri Primary and College, Bishop Cypriano Kiyangire (BCK) in Luzira fall in this category. Dr. Lucaci Patrick Lucas specializes in oral facial and implant surgery in the US. Larok Arthur was the Director of Action Aid (Uganda) and has strong links to Alliance for National Transformation Party (ANT). Tony Awany is First Secretary at Uganda’s mission in the UAE, Mone Simon is Principal Aerodromes Inspector at Uganda Civil Aviation Authority, Tempra Omona, one of the most popular Ugandan musicians. (His musical talent was nurtured from this school where he mimed Philly Bongoley Lutaaya’s Alone and Frightened effortlessly.), Aliker David Martin, a teacher, author and politician. He contested for the position of Gulu Mayor in the last election. Oci Sioko, a renowned Civil Engineer currently working with Mercy Corps in the DRC, Boniface Ojok stands out in Civil Society as promoter of peace, justice and social transformation. He has just completed his doctoral studies on Education after Conflict from Birmingham University. Dr. Julius P Akiyu sadly passed away last year but his achievements as an old boy deserves recognition. He worked with the Cardiovascular Sciences Research Center at St. George’s Hospital, University of London. His publications available online.  Uma Julius from the class of ’94 is doing amazing work in journalism. For a long time he worked Associate Editor of the Sudan Tribune, an online publication that focuses on politics in South Sudan. Gabriel Binaisa Akena and his young brother, Ayo Sam Cris founded Diro Technologies, an Information Technology firm. Sam specializes in Cyber-security and Digital Forensics having recently graduated from University of East London with distinction. He is one the few Ugandans who speak Chinese fluently having excelled and earned a scholarship to study in China. Gabriel did his Diploma in International Baccalaureate from Italy and then the rest of his studies from Uganda. He is an expert in IT networks and holds a MBA. The two brothers have excellent academic records right from primary to university and telling their story requires more space. These are many prominent old boys of the school are making worthy contribution to the development of Uganda and beyond but because of limited space the listed ones paint a picture of what excellence meant then. Also past Presidents Apollo Milton Obote and Idi Amin Dada are among high profile people who are said to have visited Negri Primary school to understand what was exactly taking place in that area which was dominated by missionaries, their schools, farm and Diocesan offices.

In trying to understand what has gone wrong with traditional schools with a focus on Bishop Angelo Negri Primary School, I had a chat with an old boy that has good institutional memory of the school. Alfonse Opwonya was nostalgic about the good old days at the once famous school. Alfonse is well known businessman, commercial farmer, business consultant and media under The Republic Lens. He says liberalization of the economy where education became commercialized can be attributed to the decline of Bishop Angelo Negri Primary School. The same applies to hospitals were the private ones are more popular because of better services. Most of the good schools were faith based especially the Catholic Church through Comboni Sisters and Verona Fathers. Once the schools were handed over to Ugandans it became impossible to access support from benefactors in Europe. In addition the tuition fees that were normally subsidized went up and most parents want value for money when fees are high. With the decline in performance, the able parents look up to Kampala schools where great results are assured. Private schools are flourishing but they come at a cost most parents can’t afford. 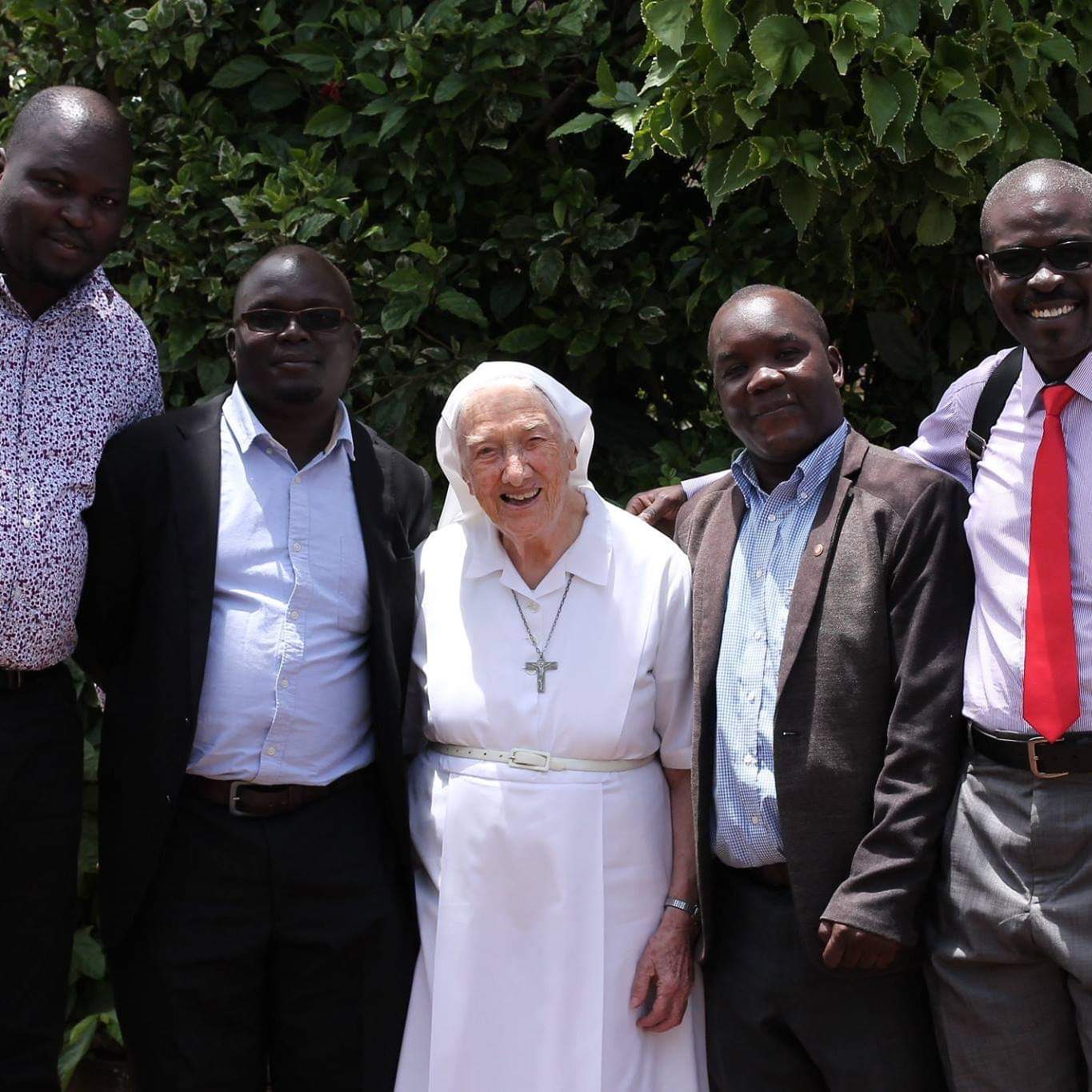 The former Headmistress Sr.Veronica Landoro meets some Old Boys before she returned to Italy in 2017

However poor administration can’t be ruled out for the decline too. Inspection of schools is no longer taken seriously. According to the Ministry of Education guidelines a headteacher should remain in a school for a maximum of ten years. The current headteacher has been at the school for a much longer time. Probably nothing spectacular should be expected as complacency may have set in. Getting used to a system that is no longer competitive leads to a business as usual attitude. Unless the old boys take serious interests in the affairs of their school like LACOBA does at St. Joseph’s College Layibi, we may not talk about Bishop Angelo Negri Primary School with pride the way we used to. The coming of the Jesuits whose vocation is education with the establishment of Ocer Campion has brought some hope to parents in Northern Uganda.

Jimmy Odoki Acellam is Coordinator of Heartsounds Uganda/Gulu and has interests in Education matters and Mental Health. He is an old boy of Bishop Angelo Negri Primary School