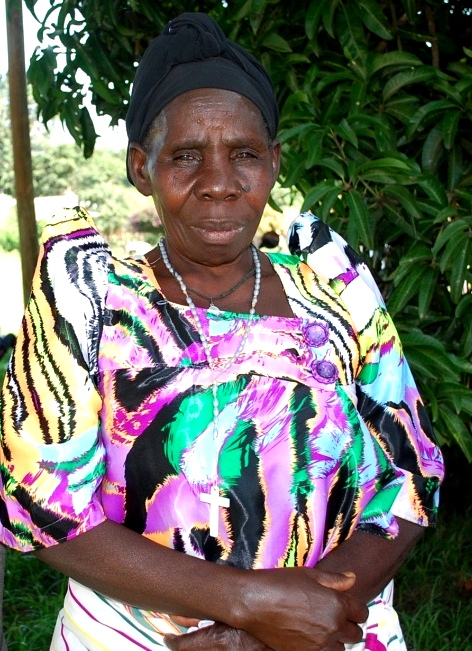 A 62-year-old woman who was blinded by severe senile cataract for close to two decades has regained her sight.

Nasitaziya Nalubega, a resident of Kagongero village in Kawunguri Parish, Kifamba sub-county, lost her sight in 2000 and could hardly move by herself. Only her children would aid her movement.

Her sight was restored recently after surgery. It was conducted in a special cataract health camp at Rakai Hospital. The camp was funded by Operation International, a mission by medical volunteers offering free services across the world.

More than 200 cataract patients who were registered for treatment in June 2019 but Nalubega’s unique severe condition needed complete surgery.

However, Dr. Seth Meskin, who led a team of ophthalmologists from the United States of America, gave her a special appointment for surgery. She was identified by Apollo Sansa at Kabumbuli II for the operation.

All hopes to regain her sight had completely died after different optometrists and ophthalmologists from both public and private facilities reportedly declared her sight was beyond repair.

“All these years, my children and colleagues have taken me to different medical camps only to be told by doctors that my case was too difficult,” Nalubega recounted, adding that she decided to come to terms with the situation and move on.

Nalubega, a widow was once a prominent farmer in her village. She grew bananas, maize, sweet potatoes and reared goats, pigs, and chicken. She would also knit marts and baskets to improve her income. She is a kind woman loved by her community members.

Her dying sight first baffled family members and some eye specialists, in this case, the Optometrists who attended to her before the condition worsened.

Initially, she lost focus on all objects. According to her, objects including people were incomplete. “I gradually blurred and within one month I developed an illuminated steamy vision before it crashed completely,” she noted.

Losing sight, one of the precious senses on a human being, is the scariest thing, according to Nalubega. “It was the shock of my life. I panicked because I could no longer see my children,” she said.

She had been stripped of the right to choice of color and fashion of clothes and other items. She became a burden to her children who became her caretakers all these years.

Apart from her family members and friends, other community members nicknamed her ‘Muzibe’, literally translated as Blind person, and in her case, ‘Blind woman’.

Initially, she would crash into walls in her house and drive nails and thorns in her feet. But as years went by, she developed an exceptional hearing and touch senses to identify objects, people, animals, and birds.

“I also mastered the geography of my home. I became very calculative of every step I took and got along. But I could struggle in the absence of my children,” she said.

She could neither visit the sick nor attend funerals and parties. She spent most of the time indoors.

What It Means To See Again

Nothing changed in the first three days after the surgery. But on the fourth day, she woke up and took off the bandages, stretched her eyes open. Her prayer had been answered. She could see everything without haze.

“I was awake by 7am. I opened the door and went out. I knelt in the compound with my hands stretched out to the heavens and gave thanks to Lord Jesus. ‘I can see again’, I shouted. My daughter and relatives came out of the house in disbelief. They cried as they hugged me,” she recounted.

Usually, a person to recover from blindness is a miracle since the eyes are the most delicate parts of a human being.

“I marveled at the trees and different vegetation. The skies looked so beautiful,” she said. Colleagues and other residents gathered at her home to celebrate a miracle that had happened.

They gave her presents in the form of chicken, goats, and bananas among other items to welcome her back from the dark world.

Most of the faces she last saw in 2000 had grown. She could not recognize them including her last born (daughter). She was only five years when Nalubega became blind.

“That’s when I last saw her face. And it has been the same image in my brain all this time. But I realized she had grown into a beautiful woman,” she added. I am so happy that I can do everything by myself once again.

Daniel Kakooza, her neighbor, who learned about the opportunity, first approached her in the first week of June 2019.

“I told her about the medical camp where her sight could be corrected,” he explained. Having attended different medical camps in the past without a solution, Nalubega declined Kakooza’s advice.

Together with Gertrude Nakalawa, the Kagongero Secretary for Women Affairs, they persuaded Nalubega and her family members not to lose hope.

She later agreed to give it another shot hence the operation being successful.

Kakooza and Nakalawa, have been so much around Nalubega all these years. Nalubega said that the duo always visited her and gave her hope even when they never had the strategic remedy for her condition.

American ophthalmologist–Dr. Seth W. Meskin, who operated Nalubega, said she had a senile cataract that affects the elderly or aging people. 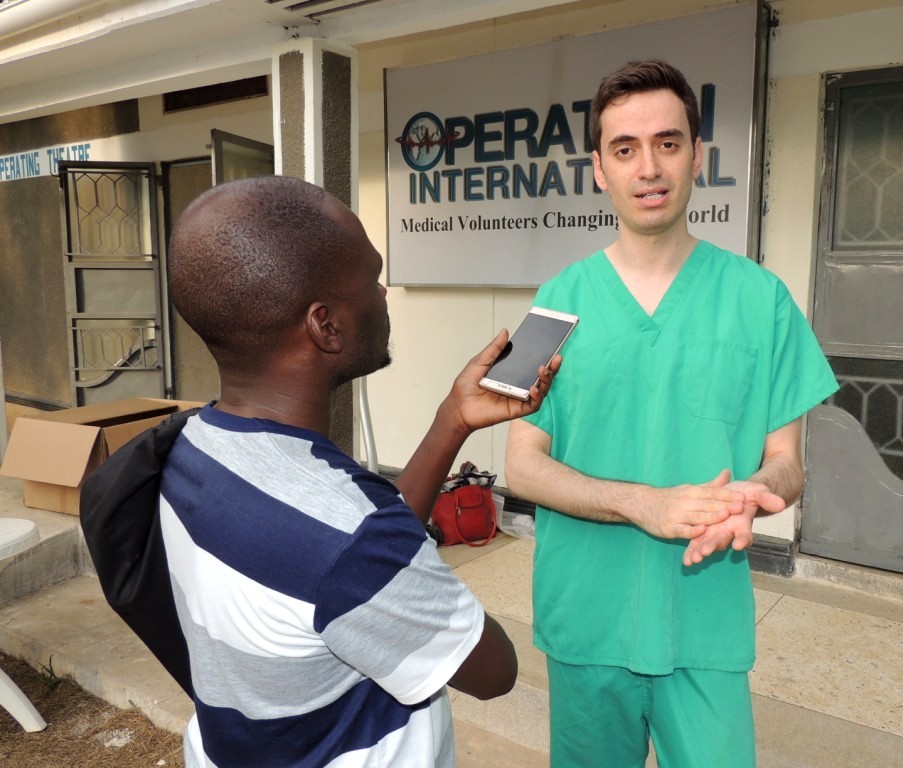 According to Meskin, her condition had worsened and it needed well-experienced doctors to handle it. He said Senile cataract is a disease that is so far the leading cause of treatable blindness across the world.

He explained that it impairs a person’s vision by clouding the lens of the eye making the patient unable to see clearly,” he added.

Although it is correctable, Meskin said cataract may at some point lead total blindness if not attended to in time. “Cataract is the leading cause of blindness among the people of old age. But there is a possibility for people with eye cataracts to regain their sight once operated,” he noted.

Unlike other patients with simple and treatable eye illnesses who turned up for eye treatment in previous health camp in 2019, Meskin explained that Nalubega’s case was unique and required surgery.

However, he advised the public to always seek eye healthcare services to avoid dire consequences. “The best way to control eye illnesses is to see a doctor in time. The earlier it is detected and treated the better,” he said.

Ivan Yiga, the Ophthalmic Clinical Officer-Rakai, said that there are hundreds of people with correctable cataract especially in poverty-stricken remote communities in Rakai.

Much as there are other causes of blindness such as diabetes, trauma, genetic, hypertension, etc, but Senile cataract is the most common worldwide among people above 40 years.

He further noted added that the majority cannot afford cataract surgery due to the high cost involved in the process.

“Cataract surgery for only one eye costs between shs400,000 and sh500,000 at any medical facility (hospital). This means the surgery will go for one million for both eyes,” he stressed.

Yiga, also, the Rakai Eye Care Focal Person stated that usually, cataract patients are diagnosed but they return home and wait because of lack of funds to pay for treatment or surgery.

Since eye illnesses are not among the Ministry of Health’s top priorities, it’s very costly for people in poor communities to access regular eye care services, hence waiting for free medical camps to solve their problems.

According to Yiga, cataract occurs mainly when the eye’s natural lens begins to fade and completely becomes opaque. Without urgent attention, he said, a person may become completely blind.

Dr. Alexander Barash, another eye specialist, mentioned that the effective solution for correctable cataracts is to replace the faded eye lens with an artificial lens.

He explained that with the advanced skills and modern equipment offered, local hospital doctors and specialists will continue operating cataract patients.

While there is a solution to cataract and other eye problems, Barash said genetic cases are difficult to treat with limited solutions.

“Fruits including carrots, citrus, and leafy vegetables such as spinach and others are important for eye health. A healthy diet is primary protection before other alternative means such as avoiding sharp sun rays from entering the eye”, he said.

Dr. Yasin Kiyemba, the Medical Superintendent- Rakai Hospital, explained that they have on many occasions partnered with Kooki Cultural Institution to lobby medical support for the poor people.

He added that Operation International has funded several medical camps to treat eye, dental, goiter, and other ailments at no cost. As of 2017, Uganda had only 48 ophthalmologists, according to Uganda Ophthalmology Society (UOS).

According to the 2009 report by the National Union of Disabled Persons of Uganda (NUDIPU), the number of blind people in Uganda had shot up from 700,000 people in 2008 to one million.

However, in 2016 the number had raised to1.4 million people with visual impairment mainly shortsightedness of which 250,000 people are completely blind according to the National Eye Health department.

Still, in 2016, the Ministry of Health with support from Sight Savers created a task force to develop Uganda Eye Care Guidelines to provide easy to use, practical, complete and useful information on how to correctly diagnose and manage eye conditions in Uganda.