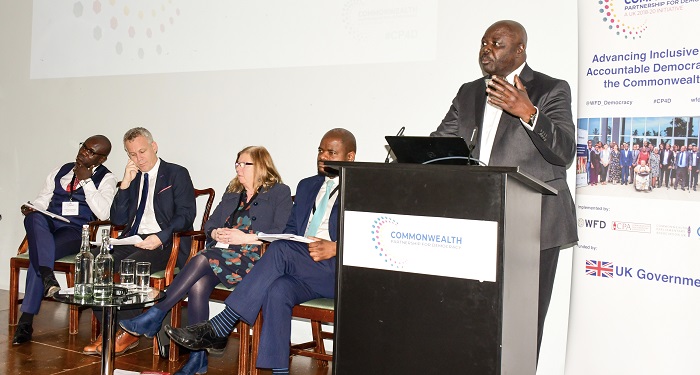 London: Uganda ranks among the top countries in the Commonwealth in promoting political inclusiveness, the Deputy Speaker of Parliament, Jacob Oulanyah has told a conference in London.

“Uganda goes an extra step by creating district representation specifically for women. Women, youth and people with disabilities are at the heart of our laws,” he said during the Commonwealth Conference on Inclusive Politics on 04 March 2020.

The Constitution provides for representation of special interest groups of women, youth, workers, the army and persons with disabilities in Parliament.

Oulanyah, who was making a presentation on inclusive politics in practice, added that in Uganda, the army and workers have not been left out in the political arena as they have representation in Parliament.

He added that to ensure gender equity, ‘Parliament introduced the certificate of gender equity, which checks the gender compliance of ministries, departments, and government agencies’.

“We may not be at 100 percent in implementation but you will agree that such representations are a result of favorable laws,” he said.

The conference is focusing on inclusive politics in practice in parliaments and local governments and how communities are addressing inclusion in politics using the updated Commonwealth Parliament Association benchmarks for Democratic Legislature: a Parliamentarians view.

Oulanyah also rubbished claims by Kenyan MP, Timothy Amwayi Aseka, who said that during his visit to Uganda, he witnessed a huge gap in representation of PWDs.

The Chief Executive Officer, Westminster Foundation, Anthony Smith said that the Commonwealth Partnership for Democracy will continue holding leaders accountable and ensure that all citizens are included in the political leadership of their countries.

The UK Commonwealth Envoy, Philip Parnum applauded leaders for progress made in achieving their commitments in Commonwealth Heads of Government Meetings as well as those made on the Sustainable Development Goals (SDGs).

“We are very proud to be part of this project to make a change for women and the marginalized,” he said.