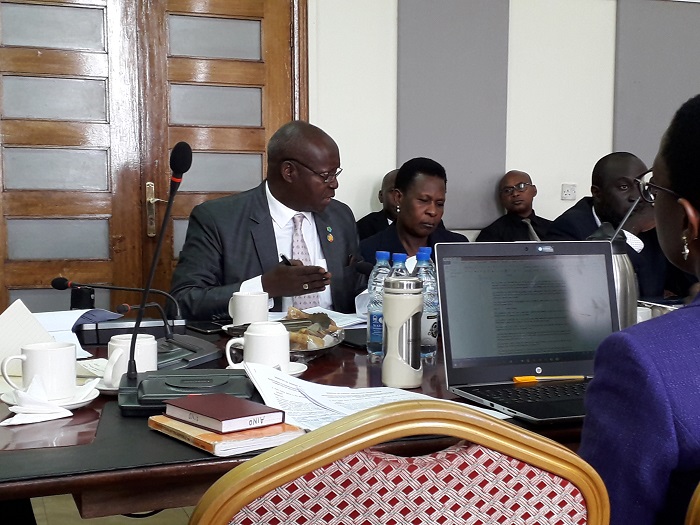 MPs sitting on the parliamentary committee on natural resources have expressed concern over a move by the cabinet to carry out a feasibility study on Uhuru falls where a power dam is set to be constructed even after objection on the project from many stakeholders in both environmental conservation and tourism sector in the country.

Appearing before the Committee chaired by Keefa Kiwanunka together with officials from Electricity Regulatory Authority (ERA) the state minister for energy Hon Simon D’Újanga disclosed that on 2nd December 2019 cabinet reviewed its decision and agreed that a feasibility study is undertaken on Uhuru falls site since Uhuru falls and Murchison falls are separate falls that are adjacent to each other.

He said cabinet in making the decision, considered the need to have the feasibility study undertaken because that is the only scientific way to determine the impact of the project on the environment, tourism, and ecology at the proposed site.

The study will include an assessment of the technical environmental, social, cultural, economic and financial viability of the project.

The MPs wondered why the government still insists on the project even after many have expressed objection on the matter.

During the meeting the ERA price manager Mr. Vianney Mutiyaba revealed that the agency was overwhelmed by the number of letters and petitions it received from stakeholders in the country objecting it from giving a license to the company that is supposed to carry out the feasibility study on Murchison and Uhuru falls ‘ to determine the damage construction of the dam will cause at the two sites.

“Hon chair all of them were objections, Mr. Mutiyaba said referring to letters and visits to ERA offices by stakeholders like  UWA, NEMA, the kingdom of Bunyoro Kitara, tour operators, Uganda tourism board, among others.

“They all recommended that the company and government should consider another site noting that the construction will have an adverse  effect on tourism in Uganda and the environment.” Mutiyaba added.

He said all the stakeholders who wrote or visited the ERA offices had the same view not to allow the power dam at the site.

“I am sorry to ask”, am sure you found this overwhelming compared to other projects” the chair Keefa Kiwanuka asked.

In response, Mr. Mutiyaba said that the regulatory body has never received any objection on any project or received this kind of representation before.

Florence Namayanja a Member of the committee and also MP Bukoto East wondered why the government can still insist on pushing with a project when all stakeholders in the country are against it.

“but somebody somewhere is insisting that this project must go on,’’ Mr. chairman given the information we have received, we are representatives of the people, we cannot go against what people are saying, this committee, should put its foot down, even reject the feasibility study because it’s not for free, even the study we going to use a lot of money to do it ‘ which money we don’t even have but borrow” Namayaja stated.

“What is clear is that the project has been rejected, because the public rejected it, the agencies that were consulted also rejected it, it was also rejected in the cabinet, then thereafter other meetings, the second cabinet seems to also have rejected or didn’t agree, but the third one agreed on a feasibility study” the chairman of the committee Mr. Keefas Kiwanuka disclosed.

Bujumbura county East MP Nsaba Buturo who had supported the plan for the feasibility study in the previous committee meetings made a u-turn, after hearing the overwhelming ‘ testimony from ERA about the objection from the public.

“Mr. chairman you have heard what ERA is saying, that they have been overwhelmed by the opposition across the nation and you have a case on the strength of that overwhelming evidence, I too would say that there is no need for a feasibility study so I want to cross the floor as far as this matter is concerned and change my mind,” Butoro said.

The Electricity Regulatory Authority (ERA) is a government agency that regulates, licenses, and supervises the generation, transmission, distribution, sale, export, and importation of electrical energy in Uganda.

Aswa County MP Reagan Okumu also a member of the committee observed that it was unnecessary to develop a dam on a site that is considered a major tourism attraction for the country, adding that the feasibility studies were uncalled for.