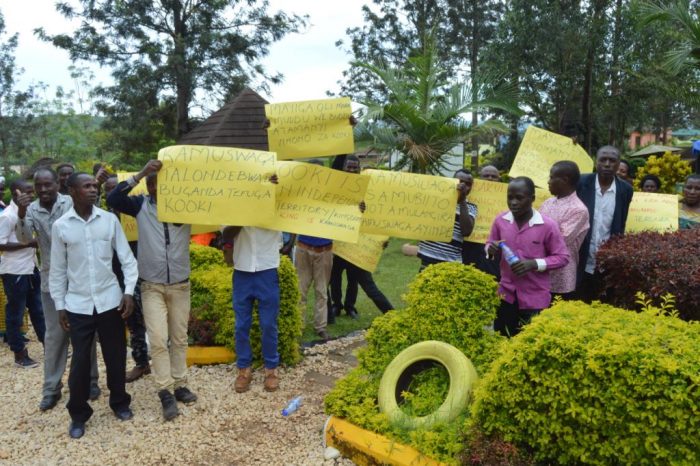 More than 200 Kooki elders and ministers staged a protest calling Buganda Kingdom’s recent reshuffle in Kooki, a direct attack on the person of the Kamuswaga-Apollo Kabumbuli II and the institution.

They said the November 1, 2019, reshuffle of Buganda’s county leaders undermined Kooki by appointing Kamuswaga and his deputies.

They further disowned the appointed deputies saying that Buganda cannot appoint the Kamuswaga or any one to lead Kooki.

This did not please Kooki leadership and its subjects. During the protest at Kooki Royal Park in Rakai, the furious elders and subjects warned Mayiga and Buganda kingdom to desist from provoking Kooki and respect their independence as a gazatted cultural institution.

The protest further prompted the members of Kooki Parliament (Lukiiko), to convene to chat a way forward pertaining to the matter.

“We take this opportunity to warn Mayiga not to cross his boundaries when it comes to Kooki matters. Unlike the past prime ministers of Buganda, Mayiga has provoked us since his appointment up to now,” said Richard Ssegwanyi, the speaker to Kooki Lukiiko.

He claims that much as Kooki accords respect for all cultural institutions, Mayiga has not treated Kooki and its leaders with respect.

“While Buganda subjects in Kooki respect the Kamuswaga as a cultural leader, Mayega has continued demeaning its leaders which may spark clashes between the subjects of the two institutions,” he argued.

Ssegwanyi further explained that Kooki has never been under Buganda but they became partners for development and protection reasons.

He explained that the Buganda-Kooki agreement ceased to function when Dr. Apollo Milton Obote’s government abolished monarchies in Uganda. “This means the binding agreements that existed then were null and void”, he said.

Yusuf Ssekalaala, the Kooki Elders Committee Chairperson, wants Mayiga and Buganda to apologise to Kooki, Kamuswaga and its subjects for violating the traditional rule by appointing deputies for Kooki and belittling the Kamuswaga.

According to Ssekalaala, Mayiga cannot interpret the Uganda gazatte which ranks Kooki sixth out of 13 independent cultural institutions in Uganda. “We regard his remarks as complete trash. And disregard the humiliating appointments”, he noted.

He further explained that the absence of Kooki Radio has hindered their campaign to enlighten the subjects and Ugandans about Kooki. He further appealed to the government support them in order to get their own frequency for development and educational purposes.

Dickson Ssebyaala, the Kooki Cultural Minister, said Mayiga is applying different strategies to disorganise Kooki which we will not accept.

He noted that Mayiga has been fueling differences between Buganda and Kooki. “Neither will we neither retreat nor surrender because we are recognised nationally and internationally by other cultural leaders. Mayiga wants to make history by attacking Kooki,” he said.

Eliyazaali Lwanga, the chairperson of Kooki subsounty Chiefs, further suggested legal action against Buganda/Mengo as an institution or get a restraining order against Buganda.

He further appealed for government intervention for redress before the situation runs out of hand.

“We strongly take a stand to ban Mayega and his so-called deputies from Kooki. They should only make personal visits if they so wish. We don’t want you (Mayiga) to regret”, Alhaji Idi Ahmed Kiwanuka, the Kooki Prime Minister declared.

He explained that Mayiga has no mandate, whatsoever, to appoint Kamuswaga and his subjects. Kiwanuka added that Mayiga’s ‘arrogance’ has erased the relationship between Buganda and Kooki as partners.

“Okay, if he claims powers to appoint Kamuswaga, then he should use it to sack him in case the Kamuswaga annoys him. He must be logical in his statement than making a nuisance of himself,” he said.

However, the lukiiko also resolved to petition the President, speaker of parliament and the Kabaka over the matter.

Gertrude Ssebugwawo, who was appointed Deputy Kamuswaga, denied Kooki’s claims saying she was appointed as a coordinator to perform Buganda’s duties in Kooki.

Therefore, she added, no one can dare to appoint the Kamuswaga and his deputies.

Noah Kiyimba, the Buganda information minister, said that the matter concerning the reshuffle was blown out of proportion. He explained that Kooki is one of Buganda’s Key Counties with Hereditary leader.

“That’s a reason why we never tampered with its leadership. Mrs. Ssebugwawo was appointed Buganda’s coordinator in Kooki because she understands Kooki where she served for some time,” he noted.

However, Kiyimba explained that Mayiga will have a statement to clarifyabout the reshuffles.

In May this year, Peace Mutuuzo, the State Minister for Gender and Culture, met Kooki officials to resolve the long-standing dispute between the Kooki and Buganda Kingdom.

According to the minister, the grievances between the two institutions could be resolved better through negotiations.