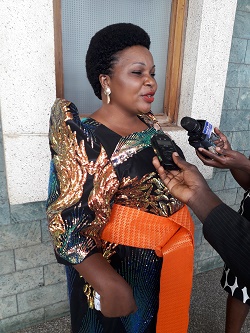 The newly elected Hoima Woman MP Harriet Businge has said she believes her victory is a blessing from God.

In an interview with media at parliament after swearing in, Businge thanked the people of Hoima for giving her an opportunity to serve them.

She said it was a hot battle but at the end the voice and will of the people had to prevail.

“So i thank the people of Hoima for giving me this opportunity and now that  I have been sworn, in am going to start right away to touch where it hurts most she said”.

She promised to immediately join fellow MPs from Bunyoro region to ensure effective representation on issues that affect them especially the issue of land, which says needs affirmative action, because of the land question in bunyoro region .

She said land is one of the issues that kept coming during her campaigns ,therefore want to join hands with other colleges in parliament to push government to ensure there is an affirmative action for land issues in bunyoro, which has been there for long .

Businge beat her rival from forum democratic change (FDC) Asinansi Nyakato last week in a by-election with a margin of more than 4000 votes.