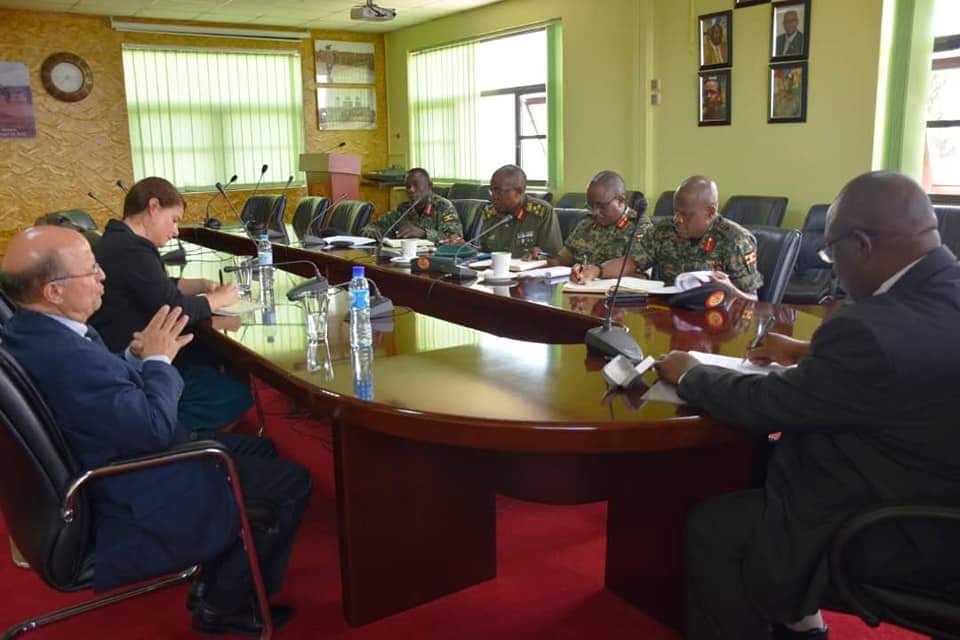 The Minister of Defence and Veteran Affairs Hon Adolf Mwesige has met  Mr Youssef Mahmoud and his team from the High Level Independent Panel on Peace Operations for the United Nations Organisation Stabilisation Mission in the Democratic Republic of Congo(MONUSCO),at the headquarters of the Ministry of Defence and Veteran Affairs in Mbuya, Kampala.

MONUSCO was tasked with neutralizing armed groups,reducing the threat posed to State authority and make space for stabilisation activities.
The Minister and the UN team discussed issues concerning the UN continuity with the provision of support to the DR Congo through the mission and the extent it has succeeded in fulfilling its core mandate  in pursuit of peace and stability.

The meeting particularly singled out the much needed combined efforts  that should  have been exerted to eliminate negative forces such as the Allied Democratic Forces(ADF) which regrettably still exists.

It was further agreed that while reviewing the mission,it is imperative that at the end of it all, there should be no vacuum or unfilled space that negative forces can take advantage of.The meeting further explored some options to consider in that regard.Hon Mwesige commended the UN for its role in maintaining international peace and security in the region while Mr. Youssef Mahmoud applauded UPDF for its  continued sacrifice and commitment towards creating and sustaining peace and stability in both Uganda and beyond.

Mr.Mahamod added that the role played by UPDF in the stabilization of Somalia is a good gesture to the rest of the world that should be emulated.Earlier, Mr Mahmoud met  the Minister of Foreign Affairs Hon Sam Kuteesa and UPDF Chief of Defence Forces Gen David Muhoozi at the  Foreign Ministry Headquarters .

The meeting  at the Defence Headquarters was attended by the Deputy Chief of Defence Forces Lt Gen Wilson Mbadi, and the UPDF Joint Chief of Staff (JCOS) Lt Gen Joseph Musanyuffu, among others.