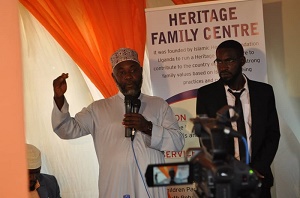 Religious leaders and elders are challenged to take the lead in imparting cultural and religious values among the young generation to check recurring disharmony and disputes among families and the increasing rate of divorce.

The call has been made by the Executive Director of Heritage Family Centre, Ssekamate Hussein during the grand launch of the center in Nansana aimed at building strong families based on Islamic teaching principles.

Ssekamate says many married couples are breaking up as result of religious leaders and elders neglecting their role of preparing their daughters and sons for marriage.

He cites the main challenges facing families including poor parenting, failure to uphold religious principles and the adoption of foreign cultures that always undermine the Ugandan culture among others.

Ssekamate also urges the government to invest in maintaining stable families saying a good family is a source of peace and development.