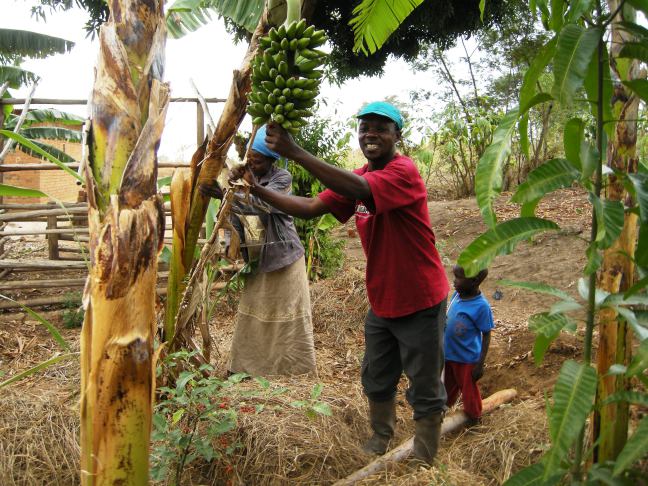 Farmers have been advised to understand the pest patterns in order to control crop pest invasion, especially in banana plantations.

This is according to Disan Muwanga, celebrated Agricultural Researcher in Masaka district. He finds it essential for all farmers to understand the banana wilt patterns that vary each season in order to deter pests from their plantations.

Basing on his expertise, different crop pests and diseases usually behave according to a particular weather condition. Some will hibernate in harsh conditions and rejuvenate later when the weather is favorable.

“The banana stool usual consists of the mother plant and other suckers which include; the daughter plant and granddaughter sucker. These act as breeding grounds for both banana wilt and banana weevil,” he noted.

In his explanation, the wilt also takes advantage of the wounds that are established on the corm (at the base of the stem) by banana weevils, to transmit it from one plant to another on the banana stool.

During the rainy season, Muwanga highlighted that the banana bacteria wilt is easily transmitted from its breeding ground because farmers repeatedly cut the old stumps of the diseased plants into pieces, and leave them to rote in the plantations. This eases the banana wilt pathogen to spread through the soil by rainwater.

“It’s usually advisable to ensure that all the stumps are split during the dry season because the banana bacterial wilt cannot hibernate or even survive in a dry and hot condition,” he stated.

Drying the stumps in the dry season significantly reduces the wilt’s breeding activities in the plantation and for this reason, the plantation will be free from it during the rainy season.

For the last decade, the region has been struggling to eliminate bacterial banana wilt. In spite of different government initiatives to reduce the problem, the wilt has persisted due to farmer’s ignorance.

He said that banana bacterial wilt is among the challenges which have consistently affected his project. “My production has been reduced from 200 bunches every season to 150 bunches as a result of the wilt,” he said.

He said that he has managed to reduce the infestation with the help of his 10 workers and hopes to increase production once they reduce the wilt infection.

Juliet Njagala, an organic banana farmer in Busense village, Kyanjale parish in Masaka district said she controls the wilt in her 5-acre-banana plantation using the knowledge she got from different researchers and training.

Unlike the dry spell, labour and financial challenges, Njagala said that the banana wilt continues to pose a threat to her banana project.

“Therefore since I incur too much in farming I have to look with a keen eye to identify and eliminate the infected plants to avoid infecting other plants,” she noted.

Musoke Gyaviira, another large-scale farmer in Dwaniro sub-county, earns over one million shillings from her 5-acre-plantation every season.

She explained that she would be earning more than two million if it wasn’t for the banana wilt invasion. “Therefore this season I am focusing on controlling the spread of the wilt in my plantation,” she said.

However, the farmers fear that crop may be wiped out because of lack vital information about the control of the spread, control and elimination of the banana disease.

According to Harith Kakooza, the Masaka District Agricultural Officer explained that the government through the Ministry of Agriculture, Animal Industry and Fisheries (MAAIF) has enabled to sensitize farmers on how to fight the wilt without spreading it further.

Kakooza said that the first thing they did was to identify the signs and symptoms of the wilt, its transmission, dangers, how to get rid of it and how to handle the tools used.

“Among the signs, an infected plant presents cream or yellowish leaves, rotting and uneven banana ripening to mention,” he explained.

He appealed to the farmers to always be careful while handling tools used on infected plants urging them to dip them in jik or put them in the fire before attending to another plant.

According to him, the best way to get rid of the infected plants is to dry them in one place and bury or burn them. “At least every plant showing signs should be removed immediately.

He explained that with the help of World Bank several farmers in Kyanamukaaka sub-county have formed groups and networks to fight banana wilt and improve soil fertility.

However, much as the wilt has affected banana production in the region, Kakooza explained that there are also other factors including poor farming practices, poor attitude, and others.

Muwanga, farmers should always keep the plantation free from flowering weed adding that they must remove and split stump at least in the first week after harvesting or after removing the diseased plants.

Another strategy is to avoid the hoe from getting into contact with the roots, plus keeping away all the rotting materials from the stool and keeping it at a distance of 3ft.

Still, he added, farmers should hurry to bury the diseased plants since the banana wilt pathogen feels comfortable in a moist environment making it convenient to multiply and spread through the wounds of the roots and corms.

“I caution farmers to do soil loosening and pruning towards the onset of the rainy season but not during the rainy season to avoid fresh wounds on the roots and the stem that exude sap,” he emphasized.

The logic behind this is, he argued, is that an infected banana plant can as well show no signs in the initial stages. This is why very many plantations display diseased plants during the dry season yet they were earlier infected during the rainy season.

According to Kakooza, there isn’t any proven research of banana Bacterial Wilt herbicides. He explained that the herbicides that exist on the market are counterfeit and cannot do much about the wilt.

“Instead, the farmers have continued buying fake herbicides to fight the wilt but getting negative results,” he noted.

He further advised farmers to focus on the highlighted practices in a bit to eliminate the wilt.