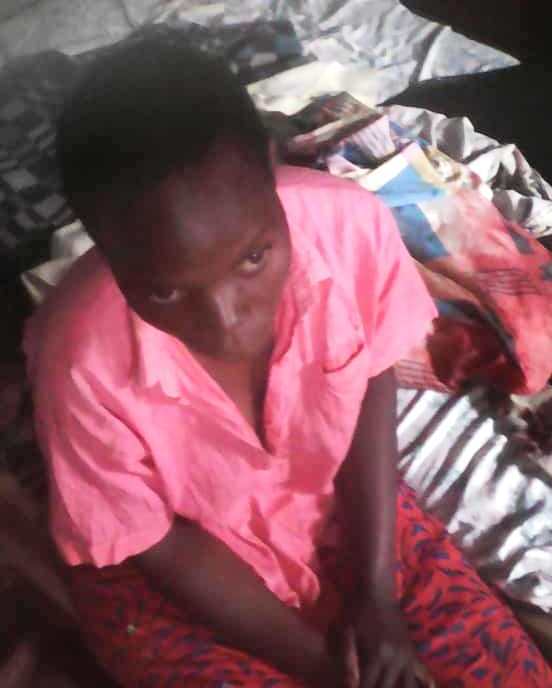 The police in Rakai are detaining a mentally ill woman said to have beheaded her baby of only six-months.

The gruesome incident occurred at Kiruli village in Kifamba sub-county. By Friday afternoon police had not recorded a statement from the suspect who has since remained silent.

Out of the blue, Evelyn Mukamugyema, 24, reportedly took a panga and cut off Miracle Atuhairwe’s head.

Mukamugyema’s grandmother was sweeping the compound when she heard the baby screaming but the sound stopped instantly.

She promptly rushed to check what had happened. To her shock, Mukamugyema was holding the baby’s head in her hands and biting it. Blood had spilled all over the ‘butchery’ spot.

She (grandmother) made an alarm attracting her neighbours and other residents.

Joseph Kayemba, one of the neighbours, said that Mukamugyema could not talk to anyone after the baffling incident. He added that she was too silent but on some occasions, she would snap and pick quarrels with anyone around her.

According to Gerald Kalasira, the Kifamba sub-county councilor, she was battling a schizoaffective disorder for several years although her condition is periodic.

Kalasira explained that Mukamugyema stays in Kampala where she does casual work but always brought back to Kifamba when her condition goes out of hand.

He added that Atuhairwe was the third of three children from different fathers. It is said that her first child was taken from her six months after delivery due to her mental condition.

However, in 2017 she gave birth to her second child but her in-laws took the 4-months baby in their custody after Mukamugyema’s repeated attempts to kill him.

In yet another episode, she gave birth to the third baby (Atuhairwe). But at six months, Mukamugyema reportedly made several attempts to kill Atuhairwe something her guardians neglected until she killed her.

Detectives said that all the circumstances surrounding the incident are still baffling and need time to establish.

Although she was charged with murder, Nuwamanya said they are to take her for mental examination at Masaka Mental Health Unit before presenting her in court.

According to Peter Ssonko, the Kifamba Internal Security Officer (GISO), her condition would only worsen during pregnancy and after birth.

He explained that Mukamugyemastopped in senior four and decided to elope with her boyfriend to Minziiro village, in Minziiro, a Uganda-Tanzania border where they gave birth to their first child.

“But since then, her mental state changed. She appears to have been initiated into cannibalism while at Minziiro. She has on many occasions attempted to kill and eat her own babies,” he argued.

Ssonko argued that some families with the cannibalism vice tend to initiate their in-laws especially women without their knowledge adding that many have fallen victim to the vice.

However, a postmortem was done and the body given to the family for burial.

However, Dr. Canaan Kateregga, the In-charge of Masaka Psychiatric Unit, disputed alleged cannibalism saying that the commanding voices in a patient’s head can drive them to do anything.

He explained that with schizoaffective disorder, a patient presents with a combination of schizophrenia symptoms like delusions and mood disorder symptoms, such as depression.

He further advised Rakai police authorities to take the suspect to Butabika National Referral Mental Hospital for attention. “On many occasions, mental patients are neglected yet they need to see a psychiatrist in time,” he said.

He said that various factors including head injuries caused by accidents, drug and alcohol abuse, epilepsy, and HIV/AIDS are the causes of mental illnesses.

Others are genetic and obstetric complications, environmental factors, and other stressors such as family breakups, losing a job,  loved one, business, child negligence and mistreatment to list a few.

Medical records at the unit indicate that 800 patients are admitted on average every month from Masaka, Rakai, Kyotera, Bukomansimbi, Kalungu, Sembabule, Lwengo, Lyantonde and Kalangala districts.

“Of the 800 patients, 70 percent are re-attendances for maintenance treatments and 30 percent being new cases. Since mental illnesses have a tendency of running a chronic course, clients keep coming for a checkup,” he said.

The unit was commissioned in 2011 and meant to admit 40 patients but the number keeps on increasing to a point that we get floor cases, whereby patients sleep on the floor due to over congestion.