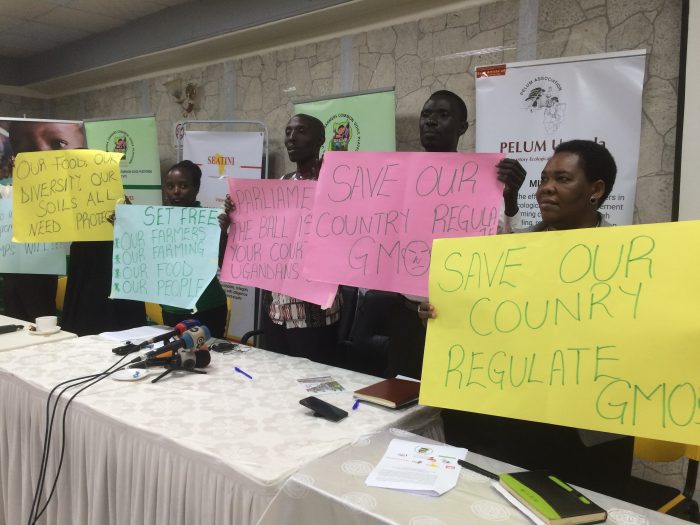 Ugandan farmers and activists are tasking parliament to highly consider the seven recommendation raised by the president in regards to the national biosafety and biotechnology bill 2012.

The president of Uganda, H.E YK.M7 declined to sign the bill which was passed by parliament on grounds that it was not living to the true reality of Uganda’s farming sector.

Addressing a joint media briefing this afternoon in Kampala, Barbara Ntambirweki a research fellow at ACODE reminds MPs that infiltration of GMOs to Uganda will cause problems to Uganda fresh fruits among other farm produce on the world market mainly in Europe where GMO produce was banned.

Agnes Kirabo from food rights alliance and Henry Nickson Ogwar from Action Aid Uganda among others who are in full support of the president assert that the issue at hand is not laying along ethnic, political or religious lines but a matter of national importance.

Among the recommendation raised by the president which he wants to be considered before it is sent back to him include, inventors or companies to be liable of any harm caused by the science, have the national genetic engineering council, the use of dangerous bacteria and chemicals among other issues raised the president’s concern.

The activists now want the discussion and consideration of the genetic engineering regulatory bill go beyond science given the potential implications to the household and national and food security, people’s livelihoods, microeconomics, environment sustainability and biodiversity, national sovereignty, human rights and social stability.

The further stress that the science in this subject is just a miniscule aspect of the bill and focusing on the science alone is diversionary.

The GMO bill has been passed and sent back to parliament three times which makes it historical in Uganda’s law making.