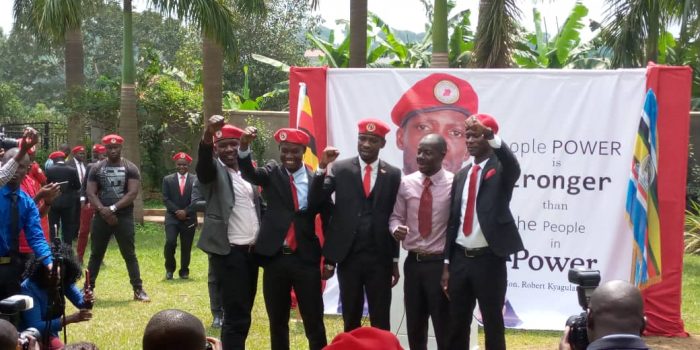 Uganda’s new political movement, People Power under the galvanized leadership of Kyadondo East legislator, Hon. Robert Kyagulanyi Ssentamu has unveiled the 2021 mobilization team of over 100 young men and women ready to cause political transformation desired and long awaited by Ugandans.

At the unveiling ceremony held today at the residence of Hon. Kyagulanyi’s home in Magere- Wakiso district, a big number of renowned politicians from across the country including legislators and youth graced the ceremony, donned in Red top caps, the color that is now known to represent the new political movement, “People Power.”

Hon. Kyagulanyi who started his speech past midday started by showing the nation how the people power message has managed to reach every corner of this nation, to him which is a sign to celebrate.

He further castigates the regime for exhibiting an iron hand by oppressing the opposition as exhibited in the clampdown to freedom of assembly, speech, and association.

Kyagulanyi said, that on the onset some people thought that they were skeptical and the idea would vanish in the air but the people proved them wrong, that adding that president Museveni and his praise singers dismissed them as inconsequential but their momentum has disproved them wrong again.

He also went ahead to remind the nation of what happened in Arua during the Arua municipality by-elections events. He then told the nation that it was good that the people of Arua sounded alarm bells to president Museveni that his time was up and voted for their own beloved Hon. Kasiano Wadri.

Even when the state is coming out very strong with guns, stay strong and don’t give up but preach messages of redemption. Says Kyagulanyi.

Kyagulanyi also revealed that the state has ordered all hotels in Kampala not to allow his movement to hold any activity in their premises hence the reason why they have held the ceremony in his residence at Magere. He then tells the nation that these are some of the reasons why they should gunner support to take over power and get this nation back to the right path.

He then asked the youth and the current generation to always salute the political elders who sacrificed to stand up against the dictator and among them include, Former Democratic party president general Paul Kawanga Ssemwogere, former Forum for democratic change president, Dr. Kizza Besigye, Former ethics minister, Miria Matembe, Renown academia Dr. Stella Nyanzi who is in prison, Fred Mugumya who is in jail in DRC among others.

He affirms that the above need to always be recognized for their contribution towards the new political block added on to this nation.

He asserts that People Power is not based on ethnic, tribal or religious backgrounds adding that it’s for every Uganda who believes in change and its at this point where he assured the nation that they are having unity processes going on among opposition political parties.

This is done to come up with a single candidate and with combined forces to uproot the current regime.