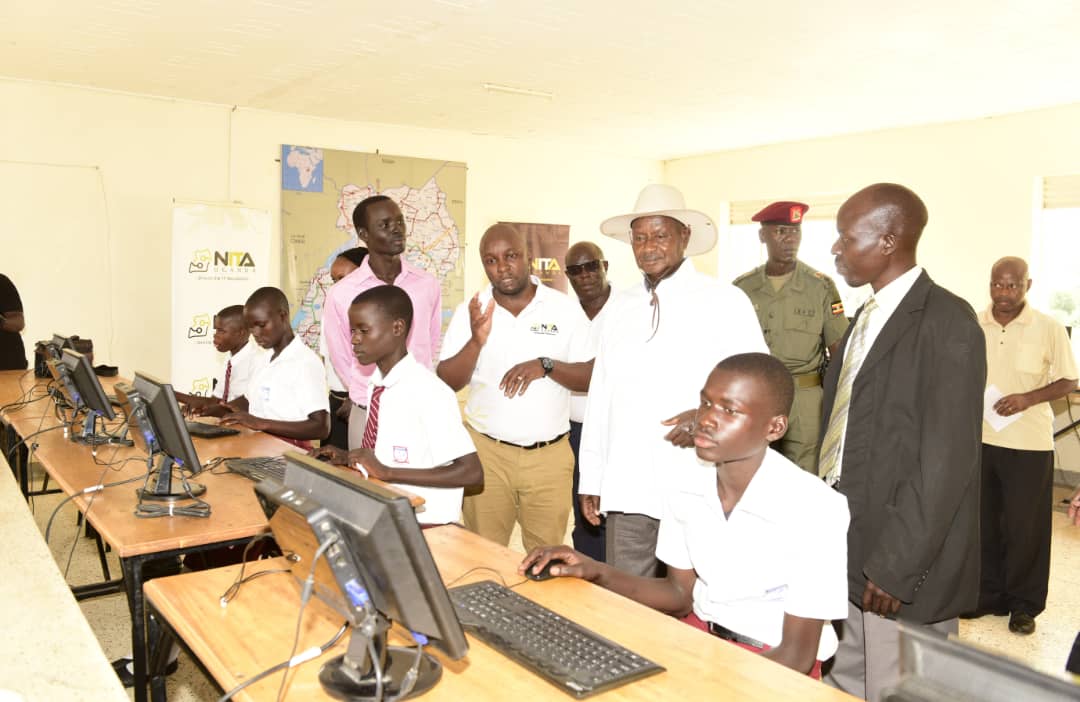 he project that is tailored for educational learning is expected to enable students access electronic textbooks loaded on computer sets. The system goes a long way to eliminate students’ expenditure on textbooks. The project is also intended to lower the cost on the Internet bandwidth. The President expressed happiness the project would benefit rural-based schools.

Phase 1 of the project was launched in 2007 to cover the areas of Kampala, Jinja, Entebbe, and Bombo while Phase 2, that became operational in 2009 extended services to the districts of Mbale, Soroti, Lira, Gulu and to Nimule that saw South Sudan also connected. The third phase, which that became operational in 2015, linked Kampala to Masaka area up to Mutukula and also Masaka to Kabale, Katuna on to Rwanda. The upcoming phase is expected to have all the Sub-Counties in the country connected.

President Museveni, who later addressed a rally at Obulengorok Primary School, sensitized wananchi in Katakwi District in particular and Teso Sub-Region as a whole, on the available approaches to create household wealth and jobs. He called for innovation to help people shift from subsistence to commercial methods of farming in order to eradicate household poverty and be economically empowered.

“Now I want you to join a movement of forms of creating wealth and jobs that I want to witness on ground when I come here for the next visit. To achieve this status, we need to listen carefully to acquire the necessary knowledge through hard work,” he said.

He recommended to the people in Teso Sub-Region the plan of modern commercial agricultural practices on four-acre pieces of land where they can grow cassava, groundnuts, fruits like oranges, have pasture for zero grazing of animals, poultry or piggery and fish farming for those who are in valleys. He said that his wish to have Teso become an area of milk. He pledged support to the people of Teso because they are hard working adding that he would instruct Operation Wealth Creation officials to provide to farmers in Teso cassava cuttings.

Mr. Museveni urged the people of the Sub-Region to take advantage of the peace and tranquility that NRM brought after the disarmament of Karimojong warriors, the new roads and electricity, among others, to be economically empowered in order to address their individual household needs.
The President said the people of Usuk County that the feeder roads, which the Local Government had failed to maintain, such as Usuk-Amuria road, should be taken over by the Uganda National Roads’ Authority (UNRA) for proper management. He pledged Shs.20 million to the youth in the area, Shs.10 million the Savings and Credit Cooperative Organization (SACCO) of NRM leaders and Shs.20 million to the Boda Boda SACCO.

The Minister of Internal Affairs, Gen. Jeje Odongo urged the people of Teso Sub-Region to continue cherishing peace, stability, love for one another and their neighbors. He pledged full support from the people of the area to NRM come 2021
Presidency Minister, Hon. Esther Mbayo, commended President Museveni for the numerous good things that he had done for Uganda adding that it is a sign of his love for the wananchi.

Usuk County MP, Hon. Peter Ogwang, appreciated the President’s visit to Katakwi District noting that the district polled the highest support to the Movement during the 2016 Presidential and General Elections.  “Katakwi District performed highest in the entire Eastern Region,” he said.
Katakwi District LC5 Chairman, Mr. Walter Locus Okirim, gave assurances that the people of the area are ready and committed to embrace the President’s ideology of wealth and jobs creation.