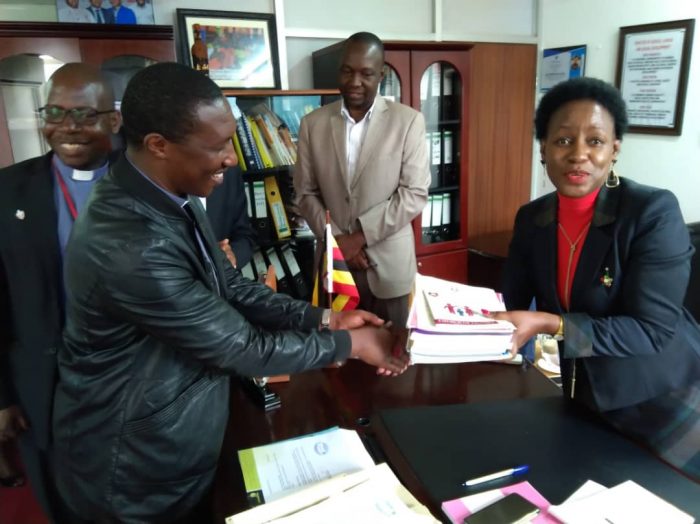 The Church of Uganda and the Ministry of Gender, Labour and Social Development have agreed to strengthen their collaboration in programmes that address children’s vulnerability across the country.

This comes at a time when the Church’s Provincial Assembly declared 2019 as a year for children, with focus on protecting children’s rights while nurturing them to grow in a desirable manner and be responsible adults in the future.

While meeting a delegation from the Church at the ministry headquarters on Wednesday, April 17, 2019, theMinister of State for Youth and Children Affairs, Hon. Florence Nakiwala Kiyingi, announced that consequently the Church of Uganda would lead Day of the African Child (DAC) celebrations this year.

The Day is commemorated every year on 16th June by all member states of African Union (AU) to specifically raise awareness on issues affecting children in general and particularly vulnerable children.

The observance stems from the June 16, 1976 incidence where hundreds of students from Soweto, South Africawere shot by security forces whilemarching as a way to demonstrate their disapproval of the Black Education Act, which segregated students based on their race.

Nakiwala noted that the Government was glad to collaborate with the Church of Uganda since its congregation consists one-third of children.

“It’s therefore pleasant to partner with an institution that first of all has the means of mass mobilization but also the numbers to cause change,” Nakiwala said.

She called on the Church not to only use word of mouth but also incorporate dissemination of hard copies of relevant documents like laws pertaining to children, training manuals and Information, Education and Communication (IEC) materials to voice out issues relating to children’s wellbeing.

She also handed to them copies of the current regime of laws and regulations on children.

“We have a Roadmap whose purpose is to position the child at the center of all Ministry activities through multiple approaches. We are engaging every child in the Family, Schools, Church, Community and country at large,” Rukundo noted.

He revealed that their choice of focus was informed by Bible teachings which proclaim children as gifts from the Lord and fruit of the womb.

“In Western countries, they have realized that the problems they have of liberalism and loss of faith are mainly because there was a time when they stopped sending their children to Church and Sunday school. Therefore, Children’s Ministry is very important for the stable growth of the Church and development of a strong generation” he added.

Statistics indicate that 11.3% of children in Uganda are orphans and half of all children are vulnerable. Only 6% are safe in their homes, schools and community. Many families are also categorized as unstable and poor. Some children are separated from one or both parents due to domestic violence, abuse, alcoholism, HIV/AIDS and other conflicts.

“Because of this, very many children are suffering silently and there is no one to listen and understand them. Children who go through these harsh conditions get affected in their physical and psychological development. But we should remember that no one will take care of our children better than us” Rev. Rukundo noted.

He revealed that the Archbishop, The Most Rev. Stanley Ntagali, in December 2018, wrote to all Bishops, Clergy, Lay Readers, Christians and People of Uganda communicating about the year of the Child and the deliberate drive to advocate for the welfare of children.

In that letter, the Archbishop called on every congregation to establish and support Children’s Ministry with clear funding for its activities.

He asked for Church teams to be equipped with skills to reach out to schools, especially primary and secondary schools, support chaplaincy and counselling services for children.

He also called on the Church to be the voice for the voiceless against child abuse, torture and neglect in homes, schools and communities.