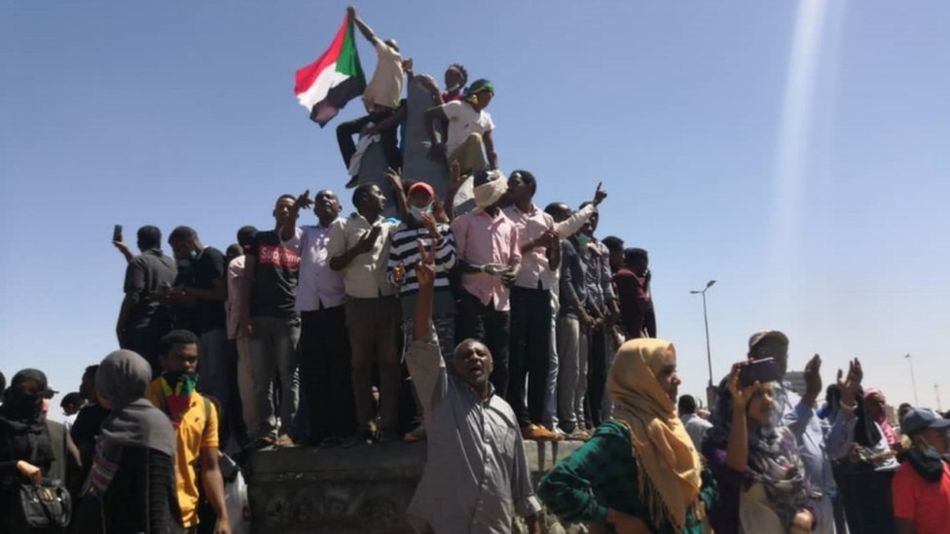 Thousands of demonstrators have held marches in Sudan’s capital Khartoum and other cities in renewed protests against President Omar al-Bashir.

In Khartoum, demonstrators reached the army headquarters for the first time since protests began in December. The presidential compound is nearby.

Security forces used tear gas and batons to try to keep protesters back.

The rallies marks the 34th anniversary of the coup that overthrew the regime of former President Jaafar Nimeiri.

Why are people protesting?

The protests were originally sparked by a hike in the cost of living but are now calling for the president, who has been in power for nearly 30 years, to step down.

Sudan’s economy has long been strained since the US imposed sanctions more than 20 years ago, accusing Khartoum of sponsoring terror groups.

On 19 December 2018, the Sudanese government announced the price of fuel and bread would rise.

In the year leading up to this, inflation was high while the Sudanese pound was rapidly dropping in value.

The announcement of the price rises triggered protests, which evolved into calls for President Omar al-Bashir to step down.

His rule has been blighted with accusations of human rights abuses. In 2009 and 2010, the International Criminal Court (ICC) charged him with counts of genocide, war crimes and crimes against humanity. A warrant for his arrest has been issued.

Who are the demonstrators?

The Sudanese Professionals Association (SPA) – a collaboration of health workers and lawyers – has been organising the protests.

Doctors have emerged as a leading force and as a result are being targeted by the authorities.

It is estimated that up two thirds of the protesters are women, who say they are demonstrating against Sudan’s sexist and patriarchal society.

How has the president responded?

In February, it looked like he might give in to protests and step down, but instead Mr Bashir declared a state of national emergency.

On the streets, security has been heavy, with tear gas used indiscriminately and reports of violence commonplace.

Sudanese authorities have been accused of arresting prominent activists and targeting medics.

Authorities say 31 people have died in protest-related violence so far, but Human Rights Watch says the figure is more like 51.

The pressure group Physicians for Human Rights says it has evidence of killing, persecution and torture of peaceful protesters and the medics caring for them.