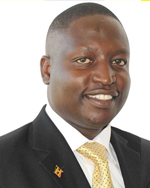 The State Minister of Finance for Planning, David Bahati has asked pastors to support the draft Faith-Based Organization policy because it is aimed at creating a better working relationship between the government and church.

FBO’s policy, a legal framework designed to monitor and regulate activities of FBO’s in Uganda has been drafted by the Directorate of Ethics and Integrity in the Office of the President.

The proposed policy among others seeks to provide standard guidelines on starting churches, enhance the partnership between government and FBOs in the fight against corruption and to regulate some activities that may seem to promote disharmony in society.

The policy also requires having all religious clerics including pastors and Muslim imams to acquire minimum academic qualifications.

Bahati says that policy is very important in governing the church. He also said that since it is the role of the government to provide security to the church and its leaders, it is paramount to have such policies for easy management.

Bahati says that before the policy is debated in cabinet, all religious leaders will first be consulted and their views considered.

Last week, the National Forum of Pastors petitioned President Yoweri Museveni to halt the draft policy. They said that is uncalled for and oppressive to persons that are called to serve God.